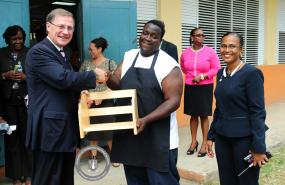 Governor of the Virgin Islands, His Excellency Mr. John S. Duncan, OBE, visited several schools last week as part of efforts to familiarise students on the role and responsibilities of his office.

On Thursday, Governor Duncan met with the principal, staff and students of the Elmore Stoutt High School and the Ivan Dawson Primary School.   Each school hosted a special assembly to welcome the Governor.

Previous visits have also been made to schools on Anegada and Jost van Dyke. Governor Duncan said the students are the future of this Territory and that he was much impressed at their level of work, enthusiasm for mathematics and science subjects and the instruction they received in modern languages. At Elmore Stoutt High School, Grade 10 student Mr. Taniel Todman presented the Governor with a sample of work from the Woodwork class.

Governor Duncan visited each class in the primary division and select classes in the secondary division.  He fielded questions from students on various topics including how he was able to get selected for the job and his experience of life in the Virgin Islands.

He also shared with students his own childhood experiences at school in Kenya and the struggles he had to overcome as a dyslexic student. 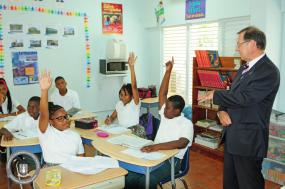 The Governor is the representative of Her Majesty the Queen in the Virgin Islands.  The Constitution gives him certain responsibilities which include oversight for external affairs, defense and internal security, administration of the Courts, and good governance of the Territory.