The Office of the City Manager will be introducing more green spaces in Road Town in line with the Building BVI Stronger, Smarter, Greener, Better initiative.

City Manager, Mrs. Janice Braithwaite-Edwards said three buildings were destroyed in the Crafts Alive Village following the passage of hurricanes Irma and Maria, and the area where those buildings were located will become a green space.

Mrs. Braithwaite-Edwards said, “We have many persons who are requesting to do parties, especially children parties, where they can be in a confined environment. Therefore, we are going to look at not replacing the buildings but creating a green space.” 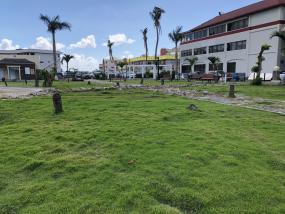 The office also plans to repair the heavily used Noel Lloyd Positive Action Movement Park which was completely destroyed by the hurricanes. The park was used by many walkers, visitors and strollers.

Mrs. Braithwaite-Edwards said the Ministry of Communications and Works had also included the creation of a more pedestrian friendly city as one of its main goals in 2017 which she says is still high on the agenda.

The City Manager said, “We lost a lot of trees and that is one of the things we want to re-appropriate. We are looking for people to donate shade trees for the city, so that people can walk comfortably through the city.”

She further added, “Once the roads have been fixed we are going to put in lighted crosswalks to make the city pedestrian friendly at night.”

The City Manager said with these improvements in the works, parking on the sidewalks and on the side of the road will be strictly prohibited.

The public is urged to follow all rules in the city as the Office of the City Manager enhances the aesthetics of Road Town.