Her Ladyship Justice Nicola Byer: ‘This Is The People’s Court’ 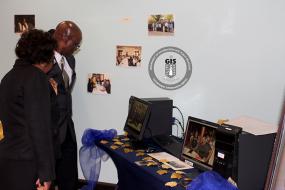 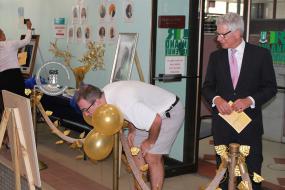 “This is the people’s court” were the sentiments expressed by Her Ladyship the Honourable Justice Nicola Byer at the opening of ‘The Court at a Glance’ Exhibition.

The exhibition which began on June 14, is the first of the Territory’s independent celebrations to mark the continued 50th Anniversary of the Eastern Caribbean Supreme Court under the theme, "Celebrating the Past, Embracing the Future”.

Her Ladyship while presenting celebratory remarks invited members of the public to join in the festive occasion.

“I certainly look forward to the support of the public at future events with a view to understanding that this is the people’s court, here to serve and administer justice to the people of the Territory of the Virgin Islands as one of the last bastions of protection in a modern democracy,” Justice Byer said.

Her Ladyship congratulated the Court on its achievement of 50 years of service to the people of the Virgin Islands and the wider Caribbean while Permanent Secretary (Ag.) in the Office of the Deputy Governor Mrs. Carolyn Stoutt Igwe declared the exhibition officially opened.

‘The Court at a Glance’ exhibition provides a snapshot into the operations of the Eastern Caribbean Supreme Court and integral personnel as it continues its 50th Anniversary celebrations.

The exhibition highlights the benefits of court appointed mediation and provides a view of a lighter, but integral interface between the court and its staff, and the BVI Bar Association.  Valuable information that has emanated from the court over the years is on display.

Members of the public are invited to peruse the photographic and documentary display set up in the West Atrium of the Central Administration Complex until June 16 when an illustrious panel of lawyers will provide pro-bono legal advice from 10:00 a.m. until 2:00 p.m.

Special thanks were offered to former Deputy Governor Mrs. V. Inez Archibald, CBE on behalf of the late Dr. Joseph Archibald, QC; Mr. Lewis Hunte, QC and the Department of Information and Public Relations for the contributions made from their private collections towards the exhibition.

The 50th Anniversary celebrations of the Eastern Caribbean Supreme Court began in the Territory with a church service on Sunday, February 26 at the New Life Baptist Church. A special sitting of the Supreme Court was held on Monday, February 27 where Her Ladyship, the Honourable Dame Janice M. Pereira, DBE, Chief Justice delivered an address to set the tone and mark the occasion.

The year-long celebrations will conclude with a gala event in February 2018.

Photo Caption:  1 and 2:  Members of the legal fraternity and well-wishers peruse the Court at a Glance Exhibition.  Free legal advice will be offered advice from 10:00 a.m. until 2:00 p.m. on June 16.