Her Majesty’s Prison Museum To Open On December 6 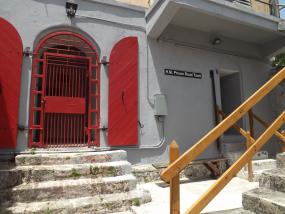 The British Virgin Islands will have an additional cultural heritage attraction for both residents and visitors, when the doors open at the new Her Majesty’s Prison Museum on Main Street on December 6.

Visitors to Her Majesty’s Prison Museum will learn about the life and times of the people, incidents of crime, punishment, social insurrections and events which may have led to incarceration. This will be portrayed through photographs and content displayed on interpretation signs and panels, as well as exhibits of prison memorabilia.

Premier and Minister for Tourism, Dr. the Honourable D. Orlando Smith, OBE said, “The primary objective of my Government is the preservation, enhancement and promotion of our culture by defining and supporting those unique aspects of our cultural heritage,” Premier Smith said, adding, “Her Majesty’s Prison Museum is an important tool towards achieving this goal and it will help in teaching our people about our history and from whence we came.”

Premier Smith said he has been looking forward to this moment since his Government’s previous term in office and he is happy that the works are completed.

In 2011, Premier Smith announced that the Government of the Virgin Islands would work on preserving and restoring the historical sites on all islands to promote their importance as part of the tourism strategy.

The entrance fee will be $5 for all non-residents, $3 for residents, and children under five years old will have free access.

Whilst an exact date for the construction of the Road Town jail is unavailable, there is mention of a penal facility in 1788, which would make it the oldest building made for public use in the BVI.  The building once housed fire services, immigration and customs. It still holds its rustic feel and now houses the new museum that focuses on the social history and cultural heritage of the BVI.

In early 2017, a second phase of works will commence to further rehabilitate and improve the museum, including the addition of a gift shop and snack bar, opening of the second floor, installation of additional interpretation panels and creating a more interactive experience through audio-visual aids.

The refurbishment of the HM Prison to a museum started in 2014 following the submission of a comprehensive plan submitted by the late Captain Hugh Whistler. Captain Whistler also served as the project manager and oversaw significant renovation and repair work, as well as the installation of interpretation information.  The completion of the works was a collaborative effort of the Minister for Communications and Works and Representative for the Fourth District, Honourable Mark Vanterpool; the Ministry of Communications and Works; the Office of the City Manager; the BVI Tourist Board, the historians of the H. Lavity Stoutt Community College and other stakeholders.