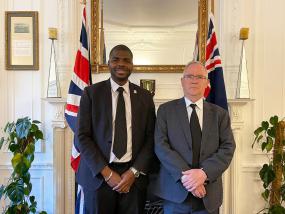 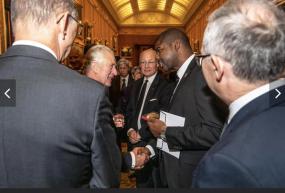 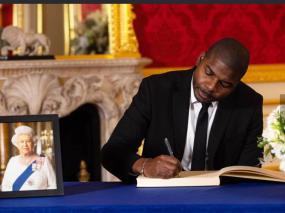 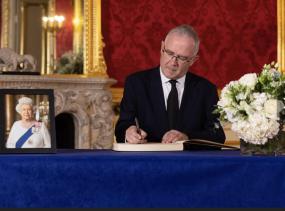 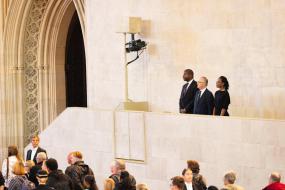 His Excellency the Governor John J. Rankin CMG and Premier and Minister of Finance Dr. the Honourable Natalio D. Wheatley paid their respects to Her Majesty Queen Elizabeth II in London on behalf of the Government and People of the Virgin Islands.

Governor Rankin and Premier Wheatley travelled to the United Kingdom on Friday, 16th September and attended a series of official events in honour of the late Monarch’s life.

On Saturday, 17th September, The Governor and Premier paid their respects to Her Majesty Lying-in-State at Westminster Palace. They were joined by Ms. Tracy Bradshaw United Kingdom Representative and Director (Ag.) of the BVI London Office.

Following the Lying-in-State, Overseas Territory Governors and Premiers were welcomed by the Speaker Sir Lindsay Hoyle at Speakers House. They later signed the official Book of Condolence at Lancaster House which was open to Overseas Representatives including those of the British Overseas Territories.

His Majesty King Charles III hosted a Reception at Buckingham Palace for visiting dignitaries on Sunday, 18th September at which Governor Rankin and Premier Wheatley were able to share their condolences to His Majesty and bid him well wishes for his reign.

The events marking Her Majesty’s passing culminated with a State Funeral at Westminster Abbey in London on Sunday, 19th September which was attended by the Governor and the Premier. On behalf of the Government and people of the Territory they joined the Royal Family, leaders, and dignitaries from across the globe and mourners in paying solemn respects. The service began at 11:00 a.m. and was conducted by the Dean of Westminster, the Very Reverend Dr. David Hoyle, with a sermon given by the Archbishop of Canterbury Justin Welby. A private committal service followed at St. George’s Chapel, Windsor.

Immediately following the funeral, the Governor and Premier attended a reception hosted by the Foreign Secretary The Rt. Hon. James Cleverly MP.

In reflection, Governor Rankin said, “It was a privilege and honour to represent the people of the Virgin Islands along with Premier Wheatley at the funeral of Her Majesty the Queen.  It was a very moving event and was a fitting tribute to her Majesty and her unwavering commitment to the peoples of the United Kingdom, the Commonwealth and all her Realms and Territories throughout her reign.”

Premier Wheatley said, “Her Majesty Queen Elizabeth II’s life was a truly admirable example of dedication to service. The Queen leaves with us a legacy that reflects an unconquerable spirit, who was driven by her confidence in herself and her abilities, and who excelled beyond expectations. She will be remembered fondly and for a very long time. It was my distinct honour and privilege to join Governor Rankin and many others in London to honour her life and reign and pay our collective respects and condolence to the Royal Family.”

Her Majesty Queen Elizabeth II passed away on 8th September at Balmoral Castle in Scotland. Her Majesty was the longest reigning monarch in British history reigning from 1952 to the time of her death in 2022. During her reign she visited the Virgin Islands in 1966 and again in 1977.