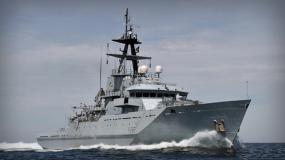 Following a short visit over the New Year, HMS Severn has returned to the British Virgin Islands for a four-day formal visit from 2-5 March, 2015.   The Ship is docked at Port Purcell.

Commanding Officer Lieutenant Commander Steven Banfield is delighted to be back in Tortola to strengthen ties with the British Virgin Islands.  He is meeting senior leaders including the Premier of the Virgin Islands D the Honourable D. Orlando Smith OBE, and is hosting a reception on board for BVI veterans and the local community. 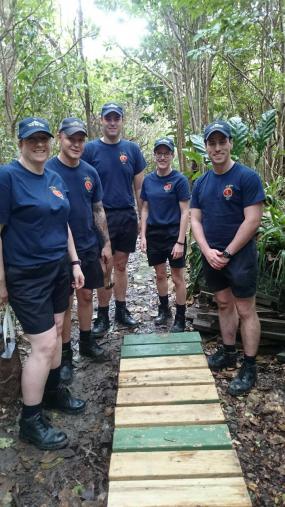 His Excellency the Governor, Mr John S Duncan OBE is hosting a formal dinner for the ship’s officers at Government House. The Governor said “I am very pleased to welcome HMS Severn back to the BVI, particularly given my close working relationship with the company of her sister ship HMS Clyde, based in Stanley, during my time as Acting Governor of the Falklands” .

HMS Severn is conducting Disaster Relief Planning on board, and in BVI waters allowing her to give more effective assistance should a disaster occur.  The Commanding Officer briefed the National Security Council on fisheries protection given HMS Severn’s particular expertise and the need to protect BVI’s unique marine environment.

The ship’s company will join National Parks Trust to carry out a community project at the J.R. O’Neal Botanical Gardens and Sage Mountain National Park.  HMS Severn also opened her doors to several local schools on Tuesday 3 March for a tour of the Ship and to learn about the Royal Navy’s work.

This visit is part of HMS Severn’s 8 month deployment to the Caribbean.  Her regular crew of 30 is complemented by nine US Coastguard officers. Defence Adviser to the Caribbean Lieutenant Colonel Patrick Brown is also accompanying HMS Severn during her visit to discuss joint work including training for the Royal Virgin Islands Police Force and environmental projects.

The ninth and current HMS Severn is a River-class offshore patrol vessel of the British Royal Navy. Named after the River Severn, the ship is the first to bear the name in 56 years.