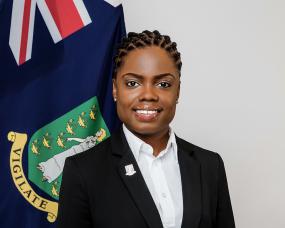 Junior Minister for Tourism Honourable Sharie De Castro recently participated in the first ever Virtual Commonwealth Youth Parliament which saw the participation of around 50 youth parliamentarians from around the Commonwealth.

The event was held from Monday, December 14 to Friday December 18 and saw members debating the Bill titled, “Youth unemployment caused by the international outbreak of COVID-19 and its effects on the fictional jurisdiction that acts as a backdrop to the programme, Commonwealthland”.

Honourable De Castro said that she enjoyed her experience and was able to appreciate her role as Preceding Officer/Speaker of the House during the event.

The Junior Minister said, “On the fourth day of the Commonwealth Youth Parliament meeting, I had the role of Speaker of the House, where I invited participants to contribute to the debate which was to address youth unemployment and its effects caused by the international outbreak of COVID-19.  During this time, I was able to appreciate the animated contributions made by youth parliamentarians across the Commonwealth”.

“I was pleased to see these young people debate the Bill presented, I am convinced that they are aware of the issues which affect us and are paying attention and taking notes, and that is why they were able to make such impressive contributions,” she further added.

The event was held in sessions and committees where other topics including social affairs, jobs and workplace, and health were discussed.

The Commonwealth Youth Parliament (CYP) provides an opportunity for young people from the Commonwealth to experience aspects of parliamentary democracy and provides a platform for them to establish links with like-minded peers.

The event also provides experiences of a ‘real-life’ working parliament or legislature. In the programme, formal parliamentary practice adapted from several Commonwealth countries is followed and the proceedings are observed under the watchful eyes of experienced parliamentary officials.

The Commonwealth Parliamentary Association (CPA) exists to connect, develop, promote, and support Parliamentarians and their staff to identify benchmarks of good governance and the implementation of the enduring values of the Commonwealth.