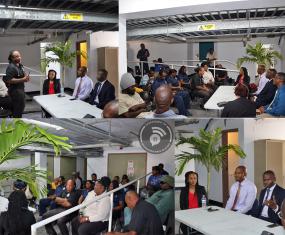 Minister for Transportation, Works and Utilities, Honourable Kye Rymer has met with officers of the Facilities Management Unit as part of a familiarisation tour of the departments under his ministry.

Honourable Rymer applauded the efforts of the unit post the disasters of 2017 on the upkeep and repairs done on the Central Administration Complex.

“We have a competent and capable team at the ministry in providing the necessary resources in achieving the goals of the unit,” he said.

Honourable Rymer encouraged the officers to maintain a consistent level of pride and enthusiasm in the advancement of the work of the ministry.

Facilities Manager, Mr. Arriel Donovan, thanked the minister for making the unit his first stop in his familiarisation tour and for also listening to the concerns raised by the officers.