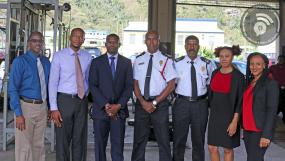 Minister for Transportation Works and Utilities, Honourable Kye Rymer met with officers of the Virgin Islands Fire and Rescue Services as part of his continuing familiarisation tours of the departments under his ministry.

Chief Fire Officer, Mr. Zeablon McLean and his officers welcomed the minister to the headquarters in Road Town and escorted the officials on a tour of the facility currently under restoration.

Honourable Rymer reiterated his commitment to the emergency response arm of his ministry and assured Chief Fire Officer McLean and his officers that he will be available to hear and act on their concerns.

Mr. McLean said the officers appreciated the visit and thanked the minister for his commitment to assist the fire service.