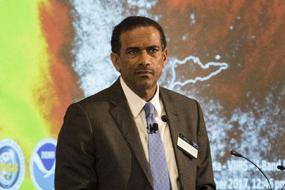 Deputy Premier and Minister for Natural Resources and Labour, Dr. the Honourable Kedrick Pickering attended the first Ocean Risk Summit held in Bermuda from May 8 to 10.

Honourable Pickering addressed the conference on the topic of ‘Cities, Islands, Coastal Infrastructure & Tourism’, and provided an overview of the Territory’s recovery efforts after the major hurricanes of 2017.

The Deputy Premier highlighted the diverse areas that are being addressed to support both recovery and resilience for future events including the removal and disposal of debris from the yachting industry, and the need to revise and harmonise legislation and regulations.

The Minister shared his experiences of hurricane Irma, and described the devastation from both a political leader and personal account. He stressed that regardless of who created the problem of climate change, “island communities are affected the most” by its impacts and action is needed to address ocean-related challenges.

The summit was organised by insurance and reinsurance group XL Catlin, in partnership with Ocean Unite, the International Union for Conservation of Nature (IUCN), the Bermuda Institute of Ocean Sciences, the Bermuda Business Development Agency, and other scientific and Bermuda-based partners.

The three-day event brought together an “A” list of ocean health advocates from government, including the Deputy Premier, His Serene Highness Prince Albert II of Monaco, Her Majesty Queen Noor of Jordan, the Honourable. C. Walton D. Brown of Bermuda, the Honourable Dominic LeBlanc of Canada, Her Excellency Ambassador Marlene Moses of Nauru, Florida House of Representative Kristen Jacobs,  Sir Richard Branson, United Nations Ambassador Richard Thompson and other speakers representing the banking and insurance industries, and academia.

The leaders examined the challenges and risks posed by ocean change and identified the opportunities it presents for innovative approaches to building resilience and mitigating its effects through applied solutions. It is expected that the leaders will help generate new and dynamic solutions.