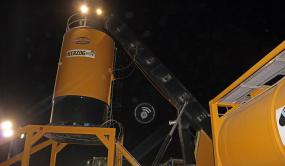 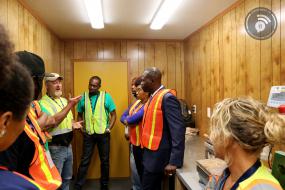 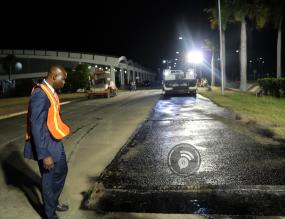 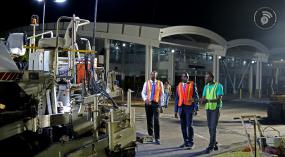 Minister for Transportation, Works and Utilities, Honourable Kye Rymer was recently given a guided tour of the Herzog asphalt plant at the Terrance B. Lettsome International Airport at Beef Island.

The minister was accompanied by a team of officials including Acting Permanent Secretary in the Ministry of Works, Mr. Jeremy Hodge; Acting Director of the Public Works Department, Mr. Navarro Donovan and PWD staff; and Junior Minister for Tourism, Honourable Shereen Flax-Charles.

Project Manager for Herzog Caribbean Ltd., Ms. Courtney Crush explained the functions of the plant and the quality control lab which will be providing asphalt for the paving of the runway at the Terrance B. Lettsome International Airport. Ms. Crush also updated the team on the work that is being carried out on the site.

Honourable Rymer said the initiative granted an opportunity for implementing best practices and that he was pleased to be able to observe the operations of the asphalt plant.

Director of the Public Works Department, Mr. Navarro Donovan said the exercise was helpful as his staff was able to get a firsthand view of the operations of a modern plant. He said the information was also important as it will help to shape a proposal for the acquisition of a plant to meet the Territory’s needs.

The team was briefed by a representative from the American Association of State Highway Transportation (AASHTO) whose accreditation is the standard setting body that publishes specifications, test protocols and guidelines which are used in highway design and construction throughout the United States.