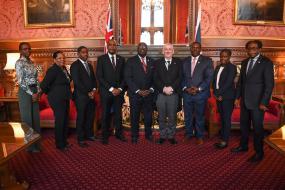 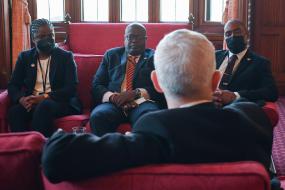 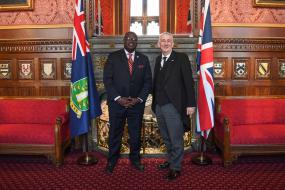 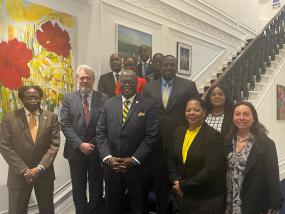 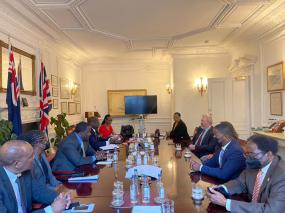 On the invitation of the Speaker of the House of Commons the Rt. Honourable Sir Lindsay Hoyle, a delegation from the House of Assembly (HoA) of the Virgin Islands (VI) visited the United Kingdom Parliament to engage in the interactive capacity building via a fact-finding mission from March 21 to 24, 2022.

The objective of the mission was to identify and document areas of the UK Parliamentary policies and procedures that would help HoA Members to broaden the scope of their work, enable them to accomplish more, and better serve the people.

The delegation was moved by a strong desire and interest to find ways to strengthen the HoA by reviewing the House of Commons operations, its laws and statutes, the roles of the Speaker and Clerk, and the security of Members. The delegation also had the opportunity to gain insights into the roles and functions of backbenchers, Leader of the Opposition and Junior Ministers.

In a review of the UK Parliament library operations, the Hansard reports, members’ privileges and immunities also formed part of the exposure of the fact-finding mission.

Open discussions were held with Speaker Hoyle, along with five current Members of the UK Parliament from the two major political parties, clerks and senior public officers working for the House of Commons an independent organisation.

While on the trip, the HoA delegation also held a session with the UK Commonwealth Parliamentary Association.  This meeting was hosted by Lord George Foulkes of Cumnock, a current Member of the House of Lords.

According to the Speaker of the HoA, Hon. Julian Willock, “We were able to secure support to re-establish our local House of Assembly Library and we are now working out the details for someone to visit and conduct an immediate assessment in that area, as we regard the library and having timely Hansard reports important to facilitate adequate research prior to Members’ participation in debates.”

The delegation also met with several Members of Parliament, including, Hon. Nigel Evans MP, who is one of three Deputy Speakers of the House of Commons and Hon. Lilian Greenwood MP, who is also an Opposition Chief Whip. Both Parliamentarians shared the practical operations in the House of Commons with the VI delegation. Discussions ranged from what is expected of Members during voting on a bill to some brief history of the Westminster system of governance and democracy.

On Wednesday, March 23, 2022, the VI delegation was the guest of Speaker Hoyle, who invited them to sit in the Chambers Gallery to witness the Prime Minister's questions.

On the final day of the visit, the delegation hosted a “Meet and Greet” with VI students and residents living and studying in the UK, along with staff members of both the BVI Tourist Board and the BVI London House.

The HoA delegation was also supported by the BVI Representative in London and the European Union, Ag. Director Attorney Tracy Bradshaw who sat in on all the meetings and facilitated courtesy calls with two current UK Parliamentarians, Hon. Andrew Rosindell and Hon. James Sunderland. Both Parliamentarians expressed an interest in the issues and relationship between the UK and the VI.