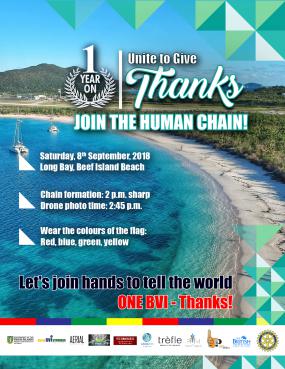 A human chain will be formed at Long Bay Beach, Beef Island this Saturday, September 8 in observation of the 1st anniversary of the passage of Hurricane Irma.

The chain will spell out the message ‘OneBVI - Thanks’ and is an initiative by the Ministry of Natural Resources and Labour in collaboration with the BVI Tourist Board.

Deputy Premier and Minister Dr. the Honourable Kedrick Pickering is inviting all community organisations and the public to participate in the event at 2:00 p.m.

The formation will be captured with drone photography and shared with the world, accompanied by press releases highlighting impacts from the hurricane, the Virgin Islands’ resilience and recovery efforts including those partners and donors who have helped.  It will also capture the beauty of the islands and its people and the ongoing threat posed by climate change.

The Deputy Premier said, “There is no doubt that our vulnerable coastlines were seriously affected by the 2017 hurricanes, but one year after Hurricane Irma our beaches remain the heart, soul and essence of Nature’s Little Secrets for both tourists and residents alike.”

Honourable Pickering added that forming a human chain on a beach is significant as linked arms represent unity. He shared gratitude to all partners and donors for their contribution to the Territory’s relief and recovery against the backdrop of what remains one of the foundations of its tourism product and quality of life.

Honourable Pickering said he is extremely pleased by the public-private partnership with non-profit organisations including the BVI Rotary Clubs, UniteBVI, Arts without Limits (AWOL), Progressive Ministry Management (PMM) and YEP, among others, who have embraced the initiative and are now working together to make this event possible.

On September 6, 2017, Hurricane Irma struck the British Virgin Islands as a Category 5 hurricane. The event resulted in significant damage which exceeded the Gross Domestic Product (GDP) of the British Virgin Islands and caused widespread damage to the housing stock, road infrastructure, ports, telecommunications, electrical infrastructure and critical facilities. Four lives were lost and at least 125 persons were injured in the devastation.