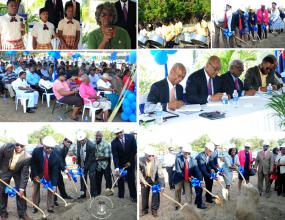 Hundreds gathered on Monday, March 30, to witness history in the making as Government signed a contract and broke ground for the construction of the Nurse Iris O’Neal Medical Centre in Virgin Gorda.

The ceremony took place on the grounds adjacent to the Nurse Iris O’Neal Clinic where the construction of the new medical centre will take place.

In attendance at this historic event were Premier and Minister of Finance, Dr. the Honourable D. Orlando Smith, OBE, Minister for Health and Social Development, Honourable Ronnie W. Skelton, Leader of the Opposition and Representative for the Ninth District, Honourable Ralph T. O’Neal, Contractor, James Todman of James Todman Construction Ltd., many other members of Government and residents.

Minister Skelton in his remarks said that the day marked a crucial milestone in Government’s quest to strengthen the delivery of health services on the Sister Islands.

“It is a very big step towards our dream of a world-class healthcare system and better health outcomes for the people of the Virgin Islands,” he said.

The Health Minister stated that the Nurse Iris O’Neal Medical Centre will provide a wide range of services to the Virgin Gorda community and will reduce the need to leave the island for medical care.

Minister Skelton also announced plans to introduce tele-medicine technology and a wider range of clinical specialties to the community clinics, as well as his long term vision to one day commission a purpose-built ambulance boat and helicopter service for medical evacuations.

The Minister for Health added that repair works were completed on the Motor Vessel Vigilant II which will be used for emergency medical transfers from Virgin Gorda to Tortola.

“The boat is now sea-worthy and we are making final arrangements to hire a captain and crew to operate it in partnership with the Fire and Rescue Services Department,” Minister Skelton said.

Honourable Skelton said he was extremely grateful and proud that so many members of the Virgin Gorda community attended the event, and had actively participated in developing the conceptual design of the much needed facility.

According to the Minister, the Virgin Gorda community gave approval for the conceptual design during a public meeting at the Catholic Community Centre on May 7, 2013.  AR Potter and Associates incorporated the community’s suggestions into a final design.  The drawings received planning approval in April 2014 enabling Government to forge ahead with the tendering process from May to August 2014.  Government then entered into negotiations with two tenderers in an effort to achieve the best value for money and in February 2015, Cabinet awarded the contact to James Todman Construction Ltd.

The facility is considered a vital component of Government’s health infrastructure development programme which seeks to ensure that all residents have access to the highest standard of health care available.