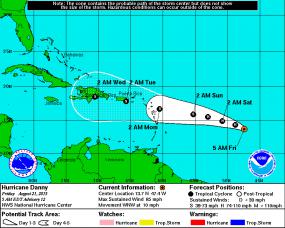 At 5:00 a.m. the centre of Hurricane Danny was located near latitude 13.7 degrees north, longitude 47.4degrees west. Danny is moving towards the west near 10miles per hour (mph) and a track to west to the west-northwest is expected during the next 48 hours.

Maximum sustained winds remain near 85 mph with higher gusts. Forecasters predict that some additional strengthening is likely today. However, the system is expected to start weakening on Saturday.

Although Danny has strengthened since the last forecast with sustained winds now near 85 mph, satellite imagery indicates no additional strengthening over the past two to three hours. Forecasters think Danny will begin to gradually weaken over the next 12 to 18 hours.

Virgin Islands and Puerto Rico: Power outages are likely due to increased winds possibly by late Monday or early Tuesday. Flooding and mudslides are also possible.

Residents of the British Virgin Islands are advised to monitor the system as it progresses and keep abreast of updates issued by the Department of Disaster Management.