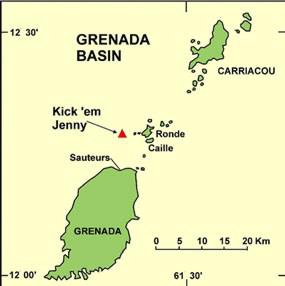 The alert level for the submarine volcano, Kick ‘em Jenny which lies between Grenada and its sister island of Carriacou has been raised to orange which indicates that there is a highly elevated level of seismic and/or fumarolic activity or other unusual activity.

In an update posted on its website, the University of the West Indies Seismic Research Centre (UWI-SRC) indicated that from 1:25 a.m. to 3:00 a.m. on Thursday, July 23, “a strong continuous signal was observed on instruments monitoring the Kick ‘em Jenny submarine volcano.”

The update further states that “signs of elevated seismicity (earthquakes) began on July 11 and continue to present. For the period since July 11, more than 200 micro and small earthquakes, of varying magnitudes, have been recorded, with the largest, prior to the strong signal, less than magnitude 3.0. There have also been observations from divers of degassing occurring off the west coast of Grenada in the Moliniere Sculpture Park area.” 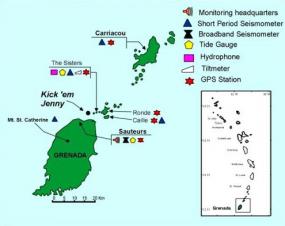 The UWI Seismic Research Centre has affirmed that the increased activity is being closely monitored and further updates would be issued as more information becomes available. The Department of Disaster Management is also continuing to monitor the situation and will provide updates as they are made available.

The UWI Seismic Research Centre has established a monitoring network and warning system specifically for Kick 'em Jenny, to provide warning to shipping in the vicinity. It must be noted that this is not a tsunami warning system. The monitoring system is designed to detect premonitory symptoms before the eruption begins, and to allow scientists to judge whether an eruption is building up to a stage where a tsunami could be generated.

With the monitoring network in place, it is expected that vulnerable communities will be given warning prior to a large eruption, enabling them to evacuate to higher ground. Recent upgrades in the monitoring system have resulted in a strong network of monitoring equipment surrounding the volcano as well as the development of a small, dedicated volcano observatory on nearby Grenada.