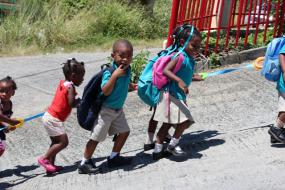 Over 4,200 persons from the public and private sector participated in this year’s national tsunami exercise, Caribe Wave Lantex 15.

This year’s scenario was based on a magnitude 8.5 earthquake occurring north of Panama. The exercise commenced at 10:05 am on March 25 and concluded just after midday with participation of persons on Anegda, Jost Van Dyke, Tortola and Virgin Gorda.  The exercise was designed to allow for testing of the national emergency broadcast and alert system and to evaluate the newly revised tsunami protocols which provide guidance to the Royal Virgin Islands Police Force and the Department of Disaster Management in handling response operations for this type of hazard impact.

The exercise ensured that persons were aware of and can reach the designated tsunami safe location points and afforded public and private sector organizations, including educational facilities, an opportunity to test their emergency plans and procedures.

Training Officer of the Department of Disaster Management and Exercise Coordinator Ms. Carishma Hicks was very pleased with the level of participation this year and indicated that there was more participation from the financial sector than she had seen in previous years.

She said, “This year, we received an increased number of calls from the private sector, in particular trust companies and banks. We had many new companies registered this year and this is an indication that we are making good strides in improving the level of preparedness and awareness in this very important sector”.

Ms. Hicks added, “We must also acknowledge the outstanding performance we saw today from the public sector, the District Officers on the Sister Islands and the schools that participated.  The majority of the participants and students made it all the way to the assembly points and followed their procedures very closely.

The Training Officer stated that partnership with the Ministry of Education and Culture has allowed the department to significantly increase the number of schools with plans that are tested through drills and exercises.

She said, “Today we saw some very creative techniques being applied by some schools to get their children to the safe location points.  It was also evident that some schools have been practicing their plans because their actions were synchronized and they were well prepared to respond”.

The tsunami simulation exercise, staged annually, is an international initiative with participation from the Caribbean as well as Central and North America. Each year, a different scenario is used to test the level of national response to these types of events. During the debrief meeting that was held following the exercise, the evaluators provided detailed information that can now be used by the department to further engage the entities that participated.  This meeting revealed that additional work is needed specifically with small businesses to ensure that they have procedures in place to safeguard their staff and investments. It was also outlined that with the increased development in the Craft Alive Village, plans need to be developed for the users of the facilities to ensure that they are adequately able to protect themselves, considering their close proximity to the coast.

The debrief meeting further revealed the power of the national alert and broadcast system that allowed for messages to be received in various forms within minutes.  The public was able to receive alerts and messages via cell providers, radio, television station CBN Channel 51, siren network, RDS radios located in schools and other critical facilities, VHF and Marine radio, email, social media and from the DDM website.

Over 130,000 people from the Caribbean and adjacent region registered to participate in the CARIBEWAVE/LANTEX15 exercise.  Historical records show that between 1610 BC to AD 2014, there have been 1212 confirmed tsunamis, of which 245 have been deadly.