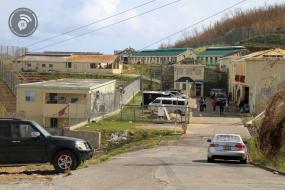 Prison authorities at Her Majesty’s Prison (HMP) have apprehended inmate Tyrone George who escaped custody after physically assaulting an officer.

Acting Deputy Superintendent at the prison, Mr. Mario Christopher said Mr. George was being held in an area where the prison’s low risk inmates are kept when the incident took place on Thursday, May 2.

He said following an extensive search by officers from the Royal Virgin Islands Police Force, George was recaptured.

Mr. Christopher said, “It was out of character for this inmate to have committed such an offence, and as a result, he will be mentally evaluated to ensure that a similar incident does not happen in the future.”

The Acting Deputy Superintendent further stated that training will continue for every prison officer and the security at HMP will be improved to lessen the reoccurrence of these situations.

Mr. Christopher added, “We have additional measures which will be put in place, such as the relocking mechanism throughout the entire facility. We also continue to train officers, as we try to minimize escape attempts as much as possible”.