Julian Willock Sworn In As Speaker Of The House Of Assembly 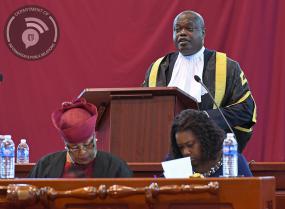 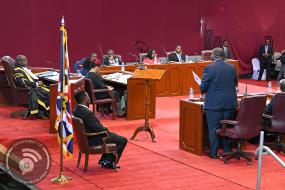 Mr. Willock was elected in accordance with Standing Orders number 4 of the House of Assembly which states: Whenever it is necessary for the House of Assembly to elect a person to be Speaker, whether after a general election or when a vacancy in the office of Speaker has occurred in any other way, the procedure for the election shall be provided by this Order.

Mr. Willock took the Oath of Office and pledged to faithfully carry out his duties as Speaker. In an address to the House of Assembly, the new Speaker thanked Premier of the Virgin Islands, Honourable Andrew Fahie and his team for the confidence lain on him. He said he was humbled and has pledged that his tenure as Speaker will be fair, non-partisan and objective.

Mr. Willock said, “Beyond the proceedings held in the Chambers, I wish to help elevate this House of Assembly to the centre for good governance and working with both the Leader of Government Business, Honourable Fahie, and the Leader of the Opposition, Honourable Penn, to see that the Government’s legislative agenda is achieved.”

The Speaker said the House of Assembly must return to a place where young boys and girls can aspire to be Ministers of Governments, Premiers and even Speakers.

He stated, “I pledge as your Speaker, working with the leader of Government’s business, Honourable Fahie and the Leader of the Opposition, Honourable Penn and all members to restore confidence in this institution; that it is regarded as a beacon for legislative justice, and for what is fair, just and right and most of all, a place where laws are made to protect all resident, locals, expatriates and everyone who call the Virgin Islands their home.”

Honourable Neville A. Smith was elected Deputy Speaker. All other Members of the House of Assembly also took their Oath and Affirmation of Allegiance to Her Majesty Queen Elizabeth II and the Oath and Allegiance for due Execution of Office at the First Sitting of the Fourth House of Assembly.