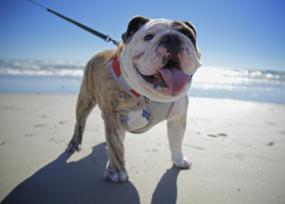 Director of Agriculture and Fisheries, Theodore E. James is asking all animal owners to keep animals, especially dogs, leashed and confined to their property.

Increasing complaints have resulted in the creation of a task force to tackle issues related to stray animals. Such issues like attacks by packs of dogs pose a great threat to the community and the department has placed the issue as top priority.

Mr. James said, “We have partnered with the Royal Virgin Islands Police Force to ensure the law is enforced and owners are held accountable for the actions of their animals.” He added, “I have seen dogs attack joggers. I have seen dogs attack women and children. I have seen damage to vehicles as a result of goats climbing and jumping on the hood and roof, vehicle collision involving cattle and sheep and massive property damage to water pipes and gardens by cattle.”

The Pounds and Livestock Brands Act, 2004 states, “any animal found straying in a public place or trespassing on any private land may be captured and impounded.” Moreover, the Dogs (Prevention of Injury to Person, Livestock and Poultry) Act, 2001 states, “officers are in right to destroy, either by shooting with a firearm or by killing in some other manner which will cause as little pain as possible, any dangerous dog.”

“Our children walk to school and attend after school programmes. Many persons walk to church, jog in the morning and at night. We have family activities on the beach. We should not have to fear being mauled by dogs or livestock when walking on the public road. If we love our pets and livestock, let us adhere to the law,” Mr. James said.

According to the Dogs (Prevention of Injury to Persons, Livestock and Poultry) Act, 2001, owners are also reminded, that it is illegal to have dogs on the beach outside the hours of 6:00 a.m. to 8:00 a.m. and 5:00 p.m. to 7:00 p.m. Dog owners should keep dogs on a leash at all times when outside of their premises. Failure to abide by this law will result in a fine not to exceed two hundred and fifty dollars ($250).

The public is asked not to feed stray animals and report sighting of such animals to the Department of Agriculture and Fisheries. Should damage caused by stray animals occur, please document and inform the department by telephone 468-6123. All unwanted pets can be surrendered to the BVI Humane Society.