Laptops And Waive Of Stamp Duty Added To Economic Stimulus 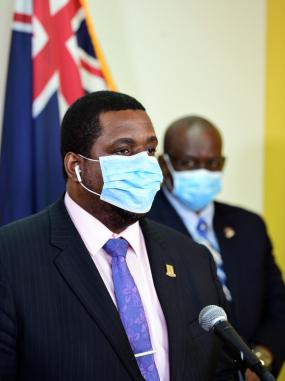 Premier and Minister of Finance, Honourable Andrew A. Fahie has announced that laptops will be provided for students and teachers and that stamp duty will be waived for purchasing of lands by Belongers as part of the Territory’s Economic Response to COVID-19.

Premier Fahie said, “We are aware that there are some students who do not have all equipment they need to function effectively in this new type of learning environment. As a result, and to support their online schooling, as well as a few teachers who have the same needs, Cabinet realised the need for an economic stimulus response in this area as well.”

The Premier said Cabinet has approved the waiving of the tender process to purchase 500 laptops for students and teachers to support online education.

It was also announced that the contract in the amount of $138,800 was awarded to Infinite Solutions for the supply of the laptops.

Meanwhile, in addressing the waiving of Stamp Duty, Premier Fahie said the Government recognised the need to ease some of the financial burden of residents who would be in a position to purchase property during this COVID-19 era in a manner that encourages the properties to remain in local hands.

The Premier said Cabinet agreed on the amendment of the Schedule of the Stamp Duty Act to allow for the waiver of stamp duty fees payable on the sale or transfer of property by a Belonger or non Belonger to a Belonger no matter the amount even if it’s just a transfer of love and affection.

“We are glad to know that during the COVID-19 era that we can help our people who may be in a position to purchase lands or if there is a need for a transfer that we can waive the Stamp Duty fees to Belonger’s only. The other areas of this initiative will be forthcoming,” he stated.

Premier Fahie gave the assurance that the economic stimulus is coming and is in its final stage prior to release.

He said, “The overall response is being tweaked so that it is practical, realistic and gets into the hands of the people in an accountable and transparent manner,” the Territory’s leader explained.

The Economic Stimulus Plan will serve as the interim framework to guide Government’s social, economic and fiscal response to the immediate and short-term needs of the Territory.