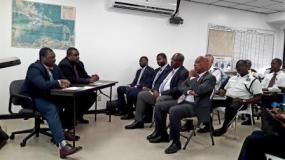 His Excellency the Acting Governor David D. Archer, Jr., and Premier and Minister of Finance Honourable Andrew A. Fahie, are urging the public to closely monitor the approach of Hurricane Jerry, which could begin to impact the Territory as early as Friday morning.

At a meeting of the National Disaster Management Council (NDMC) yesterday at the Department of Disaster Management, assembled ministers, permanent secretaries and heads of critical agencies and departments were briefed on Hurricane Jerry’s anticipated path and its potential to bring adverse weather conditions to the Virgin Islands.

The Acting Governor while addressing the council said, “We are going to prepare as if we were going to be impacted by a hurricane. Preparedness is the best way to protect the Territory’s people and property.”

“We as a public service are going to continue to prioritise the safety and security of our people and our public assets. This means that we should all be preparing ourselves to carry out all the necessary precautions as this storm approaches our area,” Mr. Archer, Jr., added.

Premier Fahie also expressed his commitment to the Territory’s mission to Be Ready as the peak of the Atlantic Hurricane Season continues.

The Premier said, “We have been blessed to be spared so far this season, but we as a Territory also need to be like Noah and do the work to build our ark so we can be ready for whatever storms might come our way. While we hope and pray that Hurricane Jerry would pass us to the north as forecast, we also want to prepare in case the storm tracks closer to us or strengthens into a major hurricane. I would strongly encourage everyone in the territory to reflect on what last-minute supplies they may need to purchase or repairs they can carry out tomorrow so that no one is caught off guard should we start to feel the effects on Friday.”