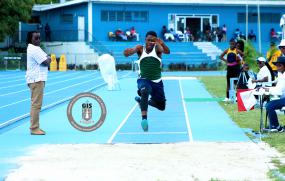 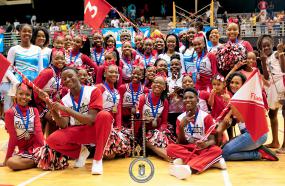 The Elmore Stoutt High School’s (ESHS) Lettsome House are the champions of the 46th Annual Inter-House Track and Field Championships for a fourth consecutive year.

Lettsome House won with 938 points followed by Flemming House with 894 points. Carlisle House came in third with 717 and Sonics, also known as O’Neal House, came in fourth with 437 points.

Principal, Mrs. Sandy Underhill said that the school’s Inter-House Sports events function as one of the school’s main highlights through friendly athletic competitions and the showcasing of some of the best athletes in the Virgin Islands.

Mrs. Underhill said, “The ESHS Inter-House events has served as one of the most attended and exciting sporting competitions in the Virgin Islands as it has been responsible for exposing some of the best athletes around the Territory to the wider community.”

The event was hosted by Talia Fredricks and DJ Dre and sponsored by telecommunication provider, Flow. Additionally, the school launched the ESHS Drum Corp.

The Inter-House events continued and concluded with the 46th Annual Inter-House Track and Field championships on March 29 and 30 with a march past with athletes and cheerleaders from four of the school’s houses.

Flemming House, Ariyah Smith was the Victrix Ludorum, while Kybah Dawson of the O’Neal Sonics was named the Victor Ludorum.

The Ministry of Education and Culture continues to support Virgin Islands’ athletes and young persons by ensuring that the Territory’s youth excel and create a culture of excellence for themselves, and by extension, the Virgin Islands.