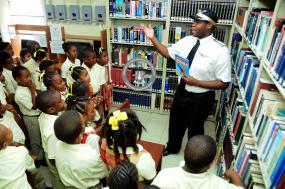 A total of 45 students submitted essays relevant to the theme: ‘Why Libraries Are Important to Me’.

The winning essays for first, second and third place will be printed in the BVI Beacon and Island Sun newspapers.

Library Week 2016 was observed from April 17 through 23 under the theme, ‘Libraries and Literacy: An Integral Part of Building Communities’.

The Ministry of Education and Culture is committed to creating a “Culture of Excellence”.