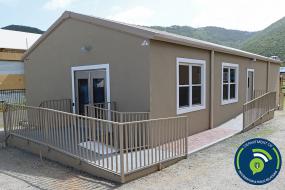 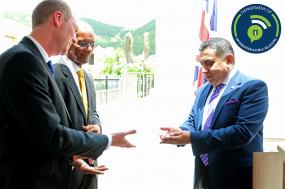 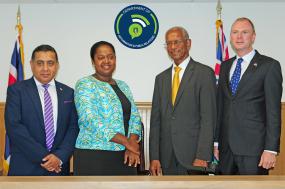 The Magistrate’s Court heard its first case in its new modular building in John’s Hole on July 31.

The building was a donation from the United Kingdom (U.K.) Government to the Government of the Virgin Islands. The symbolic hand over was officiated by U.K. Foreign Office Minister for the Overseas Territories, Lord Tariq Ahmad of Wimbledon.

Lord Ahmad who was in the Territory on a two-day visit said he was pleased to be representing the Government of the United Kingdom to mark the continuity of the judicial system in the Virgin Islands.

He said, “As I sat looking at this building, it reminded me about the importance of justice and the important principles of upholding law. It is my immense honour to be visiting this beautiful Territory that is part of the British family of our Overseas Territories which is part of us … the British Virgin Islands epitomizes the best of our great union.”

Lord Ahmad reflected on damage and destruction caused by the events of 2017 and stated that he has seen some remarkable things over the last 12 months including the incredible spirit, the human spirit and the spirit of community that has brought people together.

“Yes, while there have been challenges, the people have stood together,” he said, adding, “The  British Government and the Government of the British Virgin Islands have stood  together working through challenges to ensure that we get to this point, at the handover of this very important building.”

Lord Ahmad spoke about other U.K. officials who have taken a vested interest in the recovery of the Virgin Islands and reflected on the initial support from the U.K. Government including the visit from His Royal Highness Prince Charles, former U.K. Foreign Secretary, Mr. Boris Johnson and former Secretary of State for International Development, Ms. Pretti Petal.

He added, “The Government of the U.K., our Prime Minister and the whole Ministerial team, together with our excellent Governor stand with you to ensure that we build back better; you will never be alone, you are part of our family and we are proud of that fact.”

His Excellency Governor August J. U. Jaspert and Premier and Minister of Finance, Dr. the Honourable D. Orlando Smith, OBE thanked the U.K. Government for its continued support to the Territory during the recovery and development phases.

The Magistrate’s Court Modular building is USA manufactured, is 1365 square feet, with raw materials that are fire rated and impervious to mold and mildew. It features ADA compliant ramps and restroom facilities, a waiting area, the court room, a holding cell and the magistrate’s office. The building adheres to Miami Dade’s building codes and is structurally engineered to withstand maximum winds of 200 mph and features hurricane resistant windows and doors.

The U.K. Government and Government of the Virgin Islands remain committed to working together to rebuilding the Territory stronger, smarter, greener, better and more resilient to disasters.