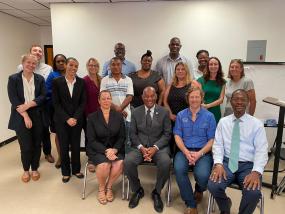 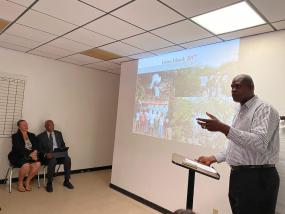 Mangrove conservationists from across the Virgin Islands met yesterday January 30 with their international counterparts to share strategies and lessons learnt on how to carry forward mangrove restoration works in the Territory.

Minister of Natural Resources, Labour and Immigration, Honourable Vincent Wheatley, while addressing the Mangroves for Flood and Climate Adaptive Management symposium, said rehabilitating the Territory’s mangroves is critical in the face of global climate change.

“In the Caribbean in general and in the BVI in particular, we are very vulnerable and susceptible to the effects of climate change,” Honourable Wheatley said, citing examples including rising sea levels, stronger tropical storms and more frequent flood events.

Attendees at the symposium heard presentations from experienced Virgin Islands mangrove researchers from the Environment Unit of the Ministry of Natural Resources, Labour and Immigration; the National Parks Trust; and the Jost Van Dykes Preservation Society as well as international partners from the Grenada Fund for Conservation, and the International Union for Conservation of Nature.

Other organisations represented at the meeting included the Ministry of Education, Culture, Youth Affairs, Fisheries and Agriculture; the H Lavity Stoutt Community College; the Adventist Development and Relief Agency; Green and Clean VI; Rotary Clubs; and the Youth Empowerment Project.

The symposium was held under the Territory’s SMART Communities Project, which began in 2017 and is being funded through the Caribbean Development Bank’s Community Disaster Risk Reduction Fund (CDRRF). It is a collaborative effort among the Government of the British Virgin Islands through the Department of Disaster Management (DDM) and several non-profit organisations to improve the Territory’s resilience to flood events.