Maritime Equipment Donated To Track Changes In The Environment 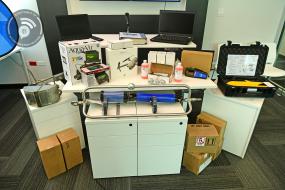 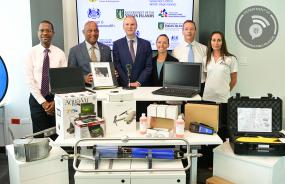 The Ministry of Natural Resources, Labour and Immigration are the recipients of maritime equipment donated through a partnership by the Recovery and Development Agency (RDA) and the Foreign & Commonwealth Office (FCO).

The equipment was handed over at the RDA’s Office in Ritter House, and will be used to conduct marine surveys in the BVI and support the Ministry’s efforts towards a Blue Economy. The data derived from the survey would also be used to develop evidence-based Marine Spatial Plans.

Minister for Natural Resources, Labour and Immigration, Honourable Vincent Wheatley said, “Our aim is to do more exploration into the water that we have in the BVI. What this equipment allows us to do is track the changes in the environment over time so that we can see the impacts of our daily activities on our environment. What we are hoping to achieve in the future is for the BVI to become a centre of excellence for Marine Studies.”

His Excellency the Governor Augustus J.U Jaspert thanked everyone for the part they played in the execution of the project. The Governor  added, “We often think of this Territory as a set of small islands, we need to encourage bigger thinking to realise our full potential. This project was about supporting that bigger ambition of building capacity within the Public Service.”

Chief Executive Officer in the RDA, Mr. Paul Bayly gave a brief description of the different marine equipment and their functions as it relates to conducting marine surveys. He said the equipment included underwater cameras that can assist in ground truthing, a drone that can assist in shallow water mapping and a water quality tester that can assist the ministry whenever needed.

Officials from the National Oceanography Centre visited the Territory from June 25 to July 5, 2019 to facilitate capacity building sessions on the use of the equipment. The officials provided training on the surveying of biodiverse marine areas, focusing on ground truthing of existing data, capacity building to transfer skills in mapping marine habitats using modern acoustic survey tools, in addition to providing recommendations of a suite of marine survey equipment suitable for local staff to undertake marine surveys to meet the objectives.

The capacity building project combined with the equipment procured will lead to the Ministry of Natural Resources, Labour and Immigration to achieve a level 2 sophistication of ability to conduct marine surveys.

The handover ceremony was the second of three phases of the capacity building project. It is another step towards evidence-based decision making which will contribute towards building and promoting the Territory’s Blue Economy.