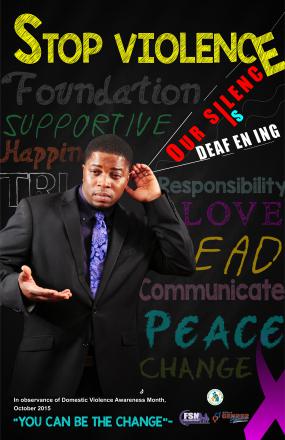 The Territory’s men will be at the forefront advocating non- violence and healthier relationships, in the ‘Men Against Violence’ campaign during this month’s Domestic Violence Awareness observance.

Gender Affairs Coordinator, Lorolie Connor said that this year’s theme is ‘You Can Be the Change,’ and the goal is to highlight positive images of men in the community that will combat the negative stereotypes and notion that males are the only perpetrators in violent disputes, especially domestic violence.

Ms. Connor said, “I know that we advocate for women survivors of violence but this year, we want to have a positive impact on change as we highlight men across the Virgin Islands to stand up against violence.”

She added, “These images will be promoted on our local television stations, the radio and heavy saturation on social media because that is mainly where the young people are and they are one of our target audiences who we need to address.”

Ms. Connor said the process of choosing the male participants for the campaign was a collaborative effort between the Office of Gender Affairs and the Family Support Network.

In addition to the Men Against Violence Campaign, the Office of Gender Affairs will spearhead awareness activities and educational sessions in communities throughout this month leading up to the Purple Day of Action on October 16.

Persons are encouraged to wear an article of clothing that symbolises support to the survivors of Domestic Violence.

For more information on the Domestic Violence Month Awareness activities, persons are asked to telephone the Office of Gender Affairs at 468-2234 or 468-2236 or visit www.bvi.gov.vg.

The Ministry of Health and Social Development aspires to provide a caring and integrated system of health and social services that facilitates human development and improves the quality of life in the Virgin Islands.