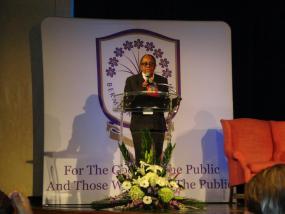 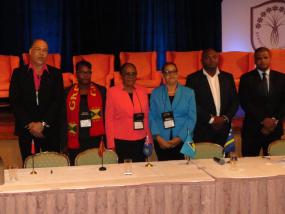 The BVI’s Complaints Commissioner, Mrs. Sheila Brathwaite was elected Vice President of the new board of the Caribbean Ombudsman Association (CAROA) at its 10th Biennial Conference held in Bermuda earlier this month.

The two segment conference was hosted by outgoing president of CAROA and Ombudsman for Bermuda, Ms. Victoria Pearman and discussed several areas including the need to establish a CAROA Secretariat, linkage with Human Rights, Data Protection, Integrity, Freedom of Information, Consumer Protection and Whistle Blowing Commissions.

The importance of the Complaints Commissioner during national emergencies and natural disaster to be a voice for the public particularly in the rebuilding process was also discussed.

Mrs. Brathwaite in tribute to the first Complaints Commissioner for the BVI, the late Elton Georges, presented a video of his major activities.

Ombudsmen and their staff were trained in the second segment of the conference in areas including conducting value for money analyses; interacting with Ministers of Government and the public while maintaining their independence and integrity; striking a win/win balance between the different stakeholders, proactively thinking to help the public; training staff to handle multiple roles; and were encouraged to acquire training in mediation and conflict resolution.

Mrs. Brathwaite said the sessions were intense, informative and interactive and fostered comradery among the participants. A wealth of knowledge was shared and disseminated making the event an invaluable opportunity. Participants were awarded certificates from Government Management Systems International of the United Kingdom.

She also added that the Office of the Complaints Commission of the Territory of the Virgin Islands is now better equipped to serve the public.

The theme of the conference was: “Strengthening the Role and performance of the Ombudsman and Human Rights Institutions in the Caribbean and Latin America”.

The Office of the Complaints Commissioner of the BVI remains committed to assisting the public while continuing to place emphasis on staff training; raising office competency and increasing public awareness of good governance through complaint handling.