“Near Average” Hurricane Season Expected - Residents Urged To Be Ready 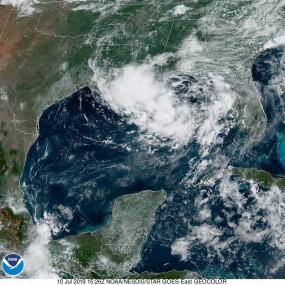 Colorado State University’s Department of Atmospheric Science has maintained the previous prediction that the 2019 Atlantic Hurricane Season will see activity levels close to the 1981 to 2010 average.

The university’s July report on the latest Atlantic Basin Seasonal Hurricane Forecast cited the currently observed near-average sea-surface temperatures and stated that “the probability for major hurricanes making landfall along the United States coastline and in the Caribbean remains near its long-term average.”

The forecast explains that over the course of the last 37 years, near-average sea surface temperatures are usually observed ahead of near-average hurricane seasons.

In addition to early arrival Andrea and the recently formed Barry, forecasters expect 12 named storms this season, including six hurricanes. Of those, two are expected to be major storms of Category 3, 4 or 5 strength, according to the report.

The report also details that while forecasters currently observe a weak El Nino in the Atlantic Basin, the phenomenon is not expected to continue into the traditional peak of the Hurricane Season, so it is unlikely to diminish any storm activity.

Director of the Department for Disaster Management, Mrs. Sharleen DaBreo-Lettsome, MBE, is urging all persons in the Territory to finalise their emergency kits, test their family and business emergency plans, and monitor conditions to stay aware of any approaching storm systems as the height of the season approaches.

Mrs. DaBreo-Lettsome said, “The forecast might seem mild, but we all know it only takes one landfall to have a devastating impact. For this reason, individuals should not wait until they know a storm is on the way, they should Be Ready throughout the season.”

For regular updates on individual weather systems and other potential hazards, download the DDM app, follow the department on social media, or visit www.bviddm.com.