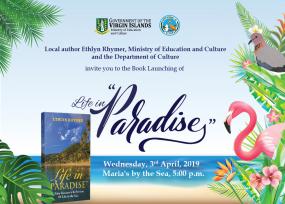 A book titled “Life in Paradise”, which reflects on life in Cane Garden Bay in the 1950’s to 1970’s will be launched in April.

Author Mrs. Ethlyn Rhymer in an interview with the Department of Information and Public Relations, explained that the book is compilation of short stories of reflection of life in the area where she grew up.

Ms. Rhymer said she was inspired by the distant memories of her childhood days growing up in Cane Garden Bay and the changes which exist now.

She said, “The book is a baby boomer’s reflection of life on the bay.  It is a series of events that happened during my era, the 50’s to the 70’s.  It tells you about the people of Cane Garden Bay, the culture and how life was during those days”.

The author is also encouraging persons who are interested in telling their story through a book to begin their journey by becoming authors.

“I would say to anyone who has a dream to fulfill the dream because each of us has a story to tell, and your story can encourage somebody.  Do not be scared, as God will give you the strength and courage to do it”.

The book launch will be held on Wednesday, April 3 at Maria’s by the Sea from 5:00 p.m. Several activities including singing and poetry as well as remarks will be made by Minister for Education and Culture, Dr. the Honourable Natalio Wheatley at the launch.

The book launch continues on Thursday, April 4 in the BreezeWay at the Government Complex, Road Town.

The Department of Culture continues to support local authors and develop the Virgin Islands’ cultural heritage and traditions.