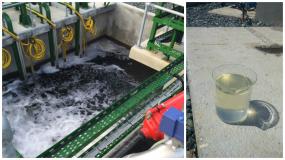 Minister for Communications and Works, Honourable Mark Vanterpool, stated in the House of Assembly that the historical commissioning and taking over of two modern state-of-the-art tertiary Sewerage Treatment Plants in Burt Point and Paraquita Bay was completed. However, the Paraquita Bay Treatment has not been placed online.

Honourable Vanterpool said that “due to the fact that the East End Sewerage Collection System does not yet have lift stations and force mains, the plant will not be able to receive and treat sewage until the latter part of 2016.”

Minister Vanterpool added that receipt of sewage to the Road Town Sewerage System has commenced.

“I am pleased to announce that, as at October 31, 2015, sewerage in the Road Town basin and its surrounding areas, is now being treated at a tertiary level for the first time in the history of the Virgin Islands”, said Honourable Vanterpool.

Samples of the effluent are clear, odorless and have been lab-tested in accordance with the quality requirements in the Water Purchase Agreement. On November 9, the Ministry signed and accepted the Burt Point Plant as complete.

On Thursday, November 12, the Ministry of Communications and Works and the Water and Sewerage Department, formally took over this Treatment Plant, through a joint signing of the Taking-Over Certificate.

The Ministry of Communications and Works is pleased that it has reached this milestone and that the Territory is moving forward with developing and enhancing the sewerage infrastructure.