No Tsunami Threat From Increased Activity At Underwater Volcano 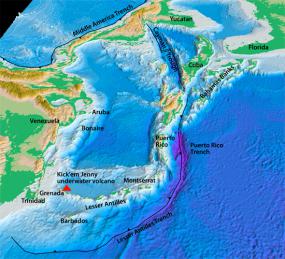 Confirmation of an eruption of the volcano on Thursday created heightened concerns in the region about the potential for a tsunami.

However, speaking in St. Vincent and the Grenadines on Thursday, Dr. Robertson gave assurances that persons should not be too concerned about tsunami generation based on the depth of the volcano.

“It’s too early to say what would happen but certainly in terms of the depth of Kick ’em Jenny, that kind of scenario of it possibly generating tsunamis is quite low and it’s nothing that people should even worry about,” he stated.

The scientist who has been at the UWI-SRC since 1993 said the more immediate concern is the impact on shipping and he encouraged boaters to adhere to the exclusion zone.

Dr. Robertson explained, “Ships should not be within five kilometres of the summit of the Kick ‘em Jenny volcano and that is mainly to safeguard against them being affected by some sort of eruptive activity.”

The increased seismic activity that has been recorded at Kick ‘em Jenny is not unusual. In the initial update on the situation Thursday, it was reported that since July 11, more than 200 micro and small earthquakes, of varying magnitudes, have been recorded.

Dr. Robertson explained that “From time to time, Kick ‘em Jenny has periods of increased seismicity. Eruptions are most often confined below the surface of the ocean and have not affected surrounding areas but it is always possible that magnitude could increase and eruptions could break the surface.”

He added, “Activity at Kick ’em Jenny is following similar patterns to what has occurred in the past where you’ve had increased seismicity followed by some sort of eruptive activity. The most common thing it does is that it goes back quiet again until the next time it happens. Since 1935, Kick ’em Jenny has had on average one episode like this every 10 years and the last time it happened was 2001, so we were expecting in a sense that something would happen within the next couple years. In fact, it’s a bit overdue so this is not unusual in that sense.”

The Department of Disaster Management will continue to monitor these updates and provide relevant information to residents of the British Virgin Islands.

The orange alert put in place on Thursday, remains in effect. As explained by the UWI-SRC on its website, this level of alert indicates that there is a highly elevated level of seismic and/or fumarolic activity or other unusual activity.

Notes to Editors: Photo attached. Link to audio statement is provided.  The full statement provided by Director of the University of the West Indies Seismic Research Centre (UWI-SRC), Dr. Richard Robertson is available via this link. https://www.youtube.com/watch?v=Z6bHq_EBgUQ&feature=share&app=desktop