North Sound Road Among Others To Be Repaired 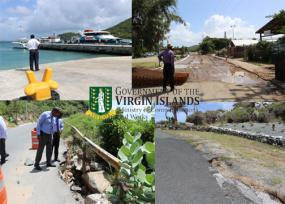 The Government of the Virgin Islands is taking action to address the undermined road in North Sound, Virgin Gorda.

Minister for Communications and Works, Honourable Mark Vanterpool, made the announcement while assessing numerous projects Government has undertaken on the sister island. The minister was accompanied by Junior Minister for Tourism, Honourable Archibald Christian and other officials from his ministry.

Minister Vanterpool said, “We’ve already issued a purchase order to begin the process to fix the road immediately. It is very dangerous, so we are tackling it right away.”

The Minister said the Public Works team in Virgin Gorda should be on the project this week and will carry out additional works to correct the issue of drainage on the road that has caused the road to be undermined.

“We are going to be doing further work on it but for now we are going to try to arrest the problem, make it safe and then look at stabilizing it for a longer term,” Minister Vanterpool added.

The drainage issues on Lee Road are being rectified as the project is nearing completion.

Minister Vanterpool said, “The contractor is paving the road now and most of the drain issues have been completed. The road itself is part of the drainage solution in terms of how it is built.”

The road will be finalised with concrete and overlaid with approximately two inches of asphalt. Sidewalks have also been constructed for the safety of pedestrians.

Minister Vanterpool said Government acknowledges that the Territory’s ports of entry are vital to its tourism economy, and has other projects planned for Virgin Gorda including repairs on the Taddy Bay Airport road. He said repair works were recently carried out on the St. Thomas Bay Jetty including the ferry dock and cargo ramp, and more works are planned to improve the structure of the dock.

Works on the dock included the laying of a wearing slab with steel reinforced concrete on the existing jetty, repairing and replacing bollards, the placement of new bollards for the cargo ramp and pouring a concrete slab on the entire apron, as well as the installation of lighting on the apron. Works began on May 1 and was completed on May 31, as scheduled.

The Ministry of Communications and Works thanks the residents of Virgin Gorda for their patience as the Government continues to enhance the infrastructure network on the sister island. The public is reminded to stay abreast with media outlets online and on radio or the Government’s YouTube and Facebook pages at the username @BVIGovernment for more information on these projects and other projects happening in the Territory.