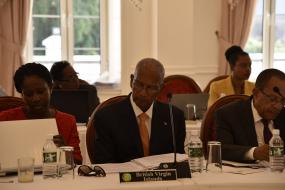 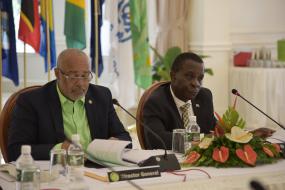 The 62nd Meeting of the Organisation of Eastern Caribbean States (OECS) Heads of Government concluded in Dominica on Thursday, November 19 after the Caribbean leaders deliberated on various issues affecting the region.

Heads of Government have agreed to pursue harmonised health policies, to strengthen the capacity of individual Member States to respond to various challenges in the health sector, principal among them the rising cost of health care. The meeting also agreed mechanisms to make the Regional Pharmaceutical Procurement System more financially viable over the long term.

Premier and Minister of Finance, Dr. the Honourable D. Orlando Smith, OBE said, “The British Virgin Islands has gained significant savings over the years from the joint procurement of medicines with OECS member states. This has allowed the Territory to supply essential medicines to the public at reasonable rates. We were therefore able to take steps to ensure that these cost benefits would continue to grow in the face of increasing costs across the health sector.”

In addition, the Meeting of Regional Heads of Government acknowledged the growing threat of water shortages due to sustained droughts as a result of climate change, and agreed to enhance the water resources management framework across the region.

Heads of Government also used the opportunity to finalise arrangements for the region’s representation to the 21st Session of the Conference of the Parties on Climate Change, being held in Paris at the end of the month.

Furthermore, the meeting discussed the programme for greater integration of Martinique into the OECS Family, and approved a new structure for the organisation to streamline and provide greater focus for the work being undertaken.

The OECS Authority is the highest decision making body of the organisation, and meets twice annually.