“The Office Is Your Ally” - Sheila Brathwaite, Complaints Commissioner 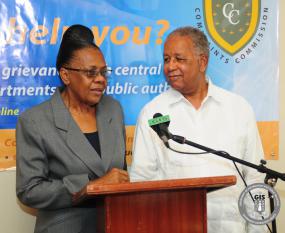 The incoming Complaints Commissioner outlined the core areas of responsibility of the office and gave the assurance that it will address complaints in a fair and confidential manner.

“In seeking to calm fears which public servants may have, I assure you that the Office of the Complaints Commissioner has as its core values confidentiality, fairness, independence and persistence for the common good. The office is not the enemy, in fact, the office is your ally, we are here to assist you. The public too needs to know that we are not biased and will address your complaints in a fair and confidential manner with the aim of finding a resolution,” she said.

Mrs. Brathwaite who was welcomed to the post at a press conference on June 30, also bid farewell to the Territory’s first Complaints Commissioner, Mr. Elton Georges, CMG, OBE who served in that position since 2009. Mrs. Brathwaite’s official appointment begins tomorrow, July 1st.

Mrs. Brathwaite said that it was with humility, delight and caution that she assumes the roles of the office and thanked His Excellency the Governor Mr. John S. Duncan, OBE, the Premier of the Virgin Islands, Dr. the Honourable D. Orlando Smith, OBE and the former Leader of the Opposition, Honourable Ralph T. O’Neal, OBE for reposing their trust in her to carry out this task.

Outgoing Complaints Commissioner Mr. Elton Georges in his remarks stated that justified complaining is a civic responsibility which often leads to an improvement in processes and procedures in the future.

Mr. Georges commended the press for their role in amplifying the voice of the Office of the Complaints Commissioner and challenged them to continue to present their key messages as the public has a right to receive from its Government good service, fair and courteous treatment and timely responses to inquiries.

The Complaints Commissioner, often called the Ombudsman, offers to the public a channel for raising complaints about maladministration in the public service and statutory bodies. It provides a mechanism to investigate complaints thoroughly and independently and offers an unparalleled ability to get to the heart of any shortcomings within the public sector.

Mrs. Brathwaite succeeds Mr. Elton Georges, the Territory’s first Complaints Commissioner, who will proceed on leave on July 1, having served in the position for the past six years.

Office of the Complaints Commisssion