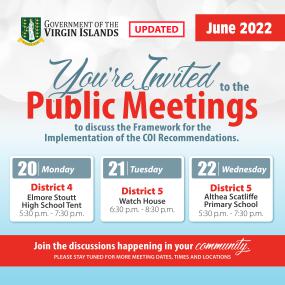 The Government of National Unity is inviting the public to participate in open discussions on the recommendations of the Commission of Inquiry report.

The series of public meetings about the ‘Framework for Implementation of the Recommendations of the Commission of Inquiry (COI) Report and Other Reforms’ will begin on Monday, June 20 at the Elmore Stoutt High School Tent from 5:30 p.m. to 7:30 p.m.; then on Tuesday, June 21 at The Watch House from 6:30 p.m. to 8:30 p.m.; and on Wednesday, June 22 at the Althea Scatliffe Primary School, from 5:30 p.m. to 7:30 p.m. More meeting dates will be announced at a future date.

Premier of the Virgin Islands Dr. the Honourable Natalio D. Wheatley is encouraging members of the public to familiarise themselves with the framework prior to the meetings.

The framework outlines the roles and responsibilities shared between the Governor, Premier, Cabinet, Ministries and House of Assembly in implementing 48 recommendations from the COI report.

The framework’s introduction states: “The recommendations overall are aimed at strengthening weak areas of governance highlighted in the [COI] report.”

The document further states: “The ultimate objectives of the reform process are to deliver justice where wrongdoing is found, engender a new culture in Government in the handling of the public’s business, and ensure the effective functioning of the Government institutions and systems that support good governance.”

The COI implementation framework can be found on the Government of the Virgin Islands’ official website – www.bvi.gov.vg, or via this direct link - https://bvi.gov.vg/sites/default/files/resources/proposal_for_implementation_of_coi_report_recommendations_-_government_of_national_unity_of_the_virgin_islands_0.pdf.

A full calendar of the public meetings will be published online at www.bvi.gov.vg.

The public meetings are in line with the ongoing reform, with a view towards improved infrastructure, improved delivery of public services, and justice for all in the Virgin Islands.