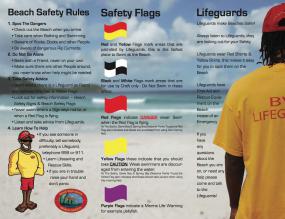 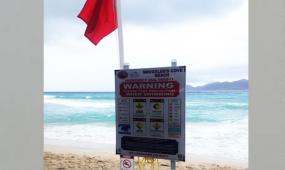 Visitors, owners, managers, operators, skippers and masters of all vessels are asked to adhere to the flag system while visiting beaches throughout the Territory.

Acting Director for the Virgin Islands Shipping Registry, Captain Raman Bala said this notice is being issued in accordance with section 163 of the Merchant Shipping Act, 2001 and failure to adhere to this warning is an offence as per the National Parks Trust Act 2006, Sections 3-6.

Captain Bala said, “Beaches throughout the Territory, specifically the Baths in Virgin Gorda are quite dangerous at times especially in the winter season and tragically the outcome of many emergency calls to the Baths result in the loss of life.”

He added, “Mariners are advised that in an effort to ensure the safety of all visitors to the Baths, the National Parks Trust of the BVI instituted a safety flag system which is updated daily and throughout the day as needed.”

He said red flags represent DANGER and beachgoers are advised against swimming in these areas when the flag is flying. The red flag present at the Baths, Devils Bay & Spring Bay National Parks Trust also signifies that boats are prohibited from using the mooring field.

Captain Bala further explained that swimmers should exercise caution where yellow flags are placed. Weak swimmers are advised to avoid swimming in these areas.

The yellow flag at the Baths, Devils Bay & Spring Bay (National Parks Trust) also signals that boats should exercise caution when using the mooring field, while the purple flags indicate a marine life warning including the presence of Jellyfish.

Persons interested in being added to the daily email updates regarding the flag status should contact Lifeguard Supervisor at the Conservation and Fisheries Department, Mr. Mark Street at surflifebvi@hotmail.com or telephone the National Parks Trust office on Virgin Gorda via telephone at 346-2779.

Note to the Editor: