Perot Hill Reservoir To Hold Over 300, 000 Gallons Of Water 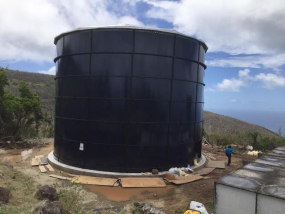 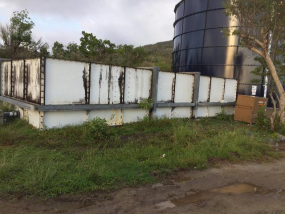 Residents of North Sound on Virgin Gorda will soon have an improved water supply with the completion of work on the new reservoir at Perot Hill.

Director of the Water and Sewerage Department, Mrs. Pearline Scatliffe-Leonard said the new twenty eight (28) feet glass-fused-to-steel tank is to replace the previous reservoir constructed of fiber glass and commissioned in 1993.

Mrs. Scatliffe-Leonard said, “The new tank is expected to address the storage concerns, as it has a holding capacity of about three hundred thousand (300,000) gallons of water.  This is over four hundred percent (400%) of the holding capacity, of the fiber glass reservoir to be replaced in the Bond.”

The director added that the old reservoir has been serving the residents of the Bond, North Sound for approximately 25 years and was designed and built to hold up to six (6) feet of water, or sixty three thousand, three hundred and fifty (63,350) gallons of water.

“Through all the repairs and maintenance efforts, the reservoir presented challenges; most notably the inability to maintain the six (6) feet of water, resulting in leaks at the panel joints, to a reduced yield of three (3) feet of water being maintained,” Mrs. Scatliffe-Leonard said.

Preparations have begun to transfer the pumping main from the old to the new reservoir. Mrs. Scatliffe-Leonard said this task is expected to take about two (2) weeks and includes an installation of an underground by-pass line. The by-pass line would become a contingent alternative provision of water in the event that maintenance is needed on the reservoir.

Customers in the Bond area are advised that once the transferring of the water begins, there will be a disruption to the water service. The two week process will include an additional three (3) days for the filling of the new reservoir.

Mrs. Scatliffe-Leonard said customers in North Sound especially the Bond, will be required to replenish their cisterns and other storage containers in anticipation of the disruption.

She added, “A notice regarding the filling of the new reservoir to capacity will be issued in due course.”

The Water and Sewerage Department seeks to ensure the provision of a continuous supply of potable water and an environmentally sound sewage disposal service to all residents of the Virgin Islands, efficiently and at affordable rates.