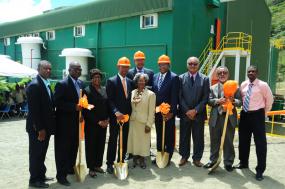 The Government of the Virgin Islands, in collaboration with the British Virgin Islands Electricity Corporation (BVIEC) is undertaking the Phase V Development Project.

This phase commenced on March 23 with the turning of the soil at the Pockwood Pond Power Station, and will cater to the growing demand for electricity in the Territory.

Phase V also involves the purchase and installation of two diesel-fired generators, adding production capacity of over 16 megawatts of electrical power, plus two 34.5 KV cables, which will follow a separate route to that of the existing Pockwood Pond to Road Town line.  Additionally it will further provide reserve capacity to take care of planned and unplanned maintenance on the generating units, thereby reducing the need for load shedding.

Minister for Communications and Works, Honourable Mark Vanterpool said that Phase V is a game changer for the Virgin Islands. He also mentioned that the Ministry will continue to build on the Territory’s infrastructure.

“Our tourism, financial services and all of our economy, depends on a better infrastructure”, Honourable Vanterpool said.

Premier and Minister of Finance, Dr. the Honourable D. Orlando Smith, OBE, emphasised the importance of enhancing the Territory’s electrical infrastructure. He further stated that a promise was made and kept that electricity generation would be improved so that the growing consumptions of the economy are met.

Premier Smith said, “Today, we are keeping our promise! A promise where we are upgrading the Territory’s electrical infrastructure so that the reliability on power supply is not just a mere vision, but a reality.  We are keeping our promise of addressing load sheds, electrical dips and intermittent inconveniences so that the anxieties our people feel become the calm in our community.”

Also speaking at the event was Chairman of the Board for the BVI Electricity Corporation Mr. Ron Potter.

Other remarks were made by Business Development Manager of Wartsila Caribbean Inc., Mr. Edmund Phillips, and General Manager of the BVIEC Mr. Leroy Abraham.

The Ministry of Communications and Works is committed to providing sustainable, reliable energy but more so, to developing a strong infrastructure for the Virgin Islands and its people.