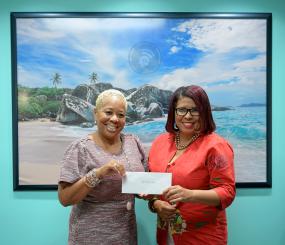 The Virgin Gorda plantation era grave site will receive a face lift following the donation of funds to the British Virgin Islands Tourist Board.

Deputy Director for the Department of Culture, Ms. Anne Lennard recently handed over a sum of $3000 to the Director of Tourism, Mrs. Sharon Flax Brutus for cleanup work to commence at the site.

Ms. Lennard said the site is a historical area that thousands of visitors and locals quickly pass by on their ferry commute on a daily basis at the St. Thomas Bay Jetty in Virgin Gorda.

“Between the white sandy beach and the parking lot there lies a small plot of land which seems somewhat out of place, as it seems undisturbed and untouched. The area is a plantation era cemetery which dates back to the 1600s. Most of the graves are covered to a great extent in dirt waiting to be revealed,” she said.

The project will require some work over time including the importation of a ground measuring device to properly locate more of the graves which might not have tombs/gravestones.

“These efforts were initially started by The BVI Tourist Board with the Department of Culture providing support when possible.” Ms. Lennard said.

The Deputy Director explained that most of the graves are covered to a great extent in dirt waiting to be revealed. “At a first glance, there are two triangular shaped brick like structures which can be seen resting in the ground,” Ms. Lennard added, “Some years back, the then Virgin Gorda Garden Club had taken on this site as a beautification project.  During their cleaning of the area they unearthed a large tombstone measuring approximately 4 feet by 3 feet with the name and time clearly stated.  It is believed that this site may have been a burial site for white planters around the 1600s.  The site was believed to extend further north and south of what now exists.”

The Deputy Director went on to state that the island of Virgin Gorda is said to have been settled around 1690 by settlers from St. Kitts, Nevis and Anguilla with quite a few being Quakers.  “Today,” she further added, “there remains similarities between Anguilla and Virgin Gorda including as many believe: the dialect, and last names like Harrigan, George, Vanterpool and Hodge.   Both even have the names of their main towns to be the Valley.”

The Department of Culture serves as a focal point for the preservation and development of the culture and traditions of the Virgin Islands.