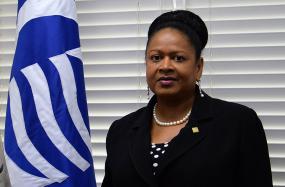 The Government of the Virgin Islands congratulates Ambassador Dr. June Soomer on receiving the highest honours that can be accorded a foreign diplomat by the Republic of Nicaragua.

The award is The Order of “Jose de Marcoleta” in the Degree of Grand Cross.

The award was conferred on Dr. Soomer by the Minister of Foreign Affairs of Nicaragua Mr. Denis Moncada Colindres at a virtual ceremony on 31st August, 2021.

In recognition of her receipt of high diplomatic honours, Premier and Minister of Finance Honourable Andrew A. Fahie praised Dr. Soomer as a consummate professional in the field of diplomacy. Premier Fahie stated, “I enthusiastically congratulate Dr. Soomer on behalf of the Government and people of these Virgin Islands on the receipt of her diplomatic award. As an Ambassador and diplomat, she has served our region with distinction and made tremendous contributions to the advancement of Latin America and the Caribbean.”

He added, “Dr. Soomer is exemplary of the excellence of Caribbean women in professional and diplomatic life. We are grateful that Dr. Soomer has chosen to support the Virgin Islands via Economic Commission for Latin America (ECLAC) in the development of our National Sustainable Development Plan.

“The Caribbean is fortunate to have someone of her stature contributing to the ongoing development of the region,” Premier Fahie added.

In terms of professional background, Ambassador Dr. Soomer is an accomplished diplomat who recently served as the first female Secretary General of the Association of Caribbean States (ACS) from 2016 to 2020 where she revitalised the regional body. She previously served as Saint Lucia’s Ambassador to Organisation of Eastern Caribbean States (OECS) and the Caribbean Community (CARICOM) from 2008 to 2016, being the first woman to do so.

Outside of her career in diplomacy, Dr. Soomer is an academic and writer who currently serves as the Chair of the University of the West Indies (UWI) Open Campus Council. Among her academic accolades, she holds the distinction of being the first woman to graduate from the UWI Cave Hill Campus with a doctorate in History in 1994.

The Virgin Islands salutes Ambassador Dr. June Soomer on receiving the highest honours accorded to a foreign diplomat by the Republic of Nicaragua.