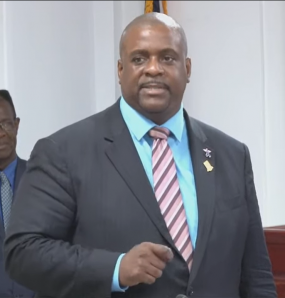 Premier and Minister of Finance, Honourable Andrew A. Fahie has stated that the practice of submitting  questions for answer in the House of assembly is critical for the strengthening of democracy, transparency and accountability in the Virgin Islands.

Premier Fahie in a statement at the Seventh Sitting of the First Session of the Fourth House of Assembly on Thursday, October 17 expressed satisfaction that Members of the Opposition have also agreed that such practice is of critical importance as the Virgin Islands is forging ahead in its quest of becoming self-reliant.

Premier Fahie said, “We want our people to understand that the answering of questions by my Government can only make our people stronger because they would be well informed not only through Government communications and public relations channels and the media, but through this Honourable House where all 13 Members, including the Attorney General have an obligation to promote and engage in transparent reporting to the people, once it does not create a security breach.”

Honourable Fahie further stated that the words democracy, transparency and accountability are all principles of Good Governance.  He also encouraged members of Her Majesty’s Opposition to move along with the public’s obligations, and reminded them that the stronger the Opposition, the better the Government.

“It is hoped that the Opposition will move on with the forming of the Public Accounts Committee and move along with the public expectations. I am there for you.” Premier Fahie added.

The House of Assembly is the law making body for the Virgin Islands.