STATEMENT BY PREMIER AND MINISTER OF FINANCE
DR. THE HONOURABLE NATALIO D. WHEATLEY

AT PRESS BRIEFING FOR UPDATES ON CURRENT MATTERS 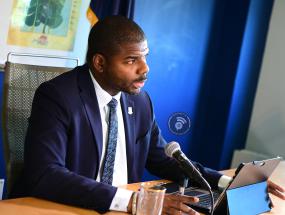 A pleasant good afternoon to the members of the press corps, fellow Virgin Islanders, persons viewing online and listening via radio.

The Government of National Unity remains committed to keeping the public informed as we continue to work for the betterment of these Virgin Islands.

First I would like to update the people of the Territory on my recent travel to the United Kingdom to attend the funeral of Her late Majesty Queen Elizabeth II.

The Virgin Islands delegation was comprised of myself and His Excellency the Governor Mr. John Rankin, CMG, who served faithfully as the Queen's Representative while she reigned. The Acting Director of the BVI London Office Ms. Tracy Bradshaw ably assisted us.

As is my duty as the Premier of these Virgin Islands, I went to Westminster Palace in London where I saw the Queen lying in state and paid my respects. I personally conveyed to His Majesty King Charles III and the Royal Family the condolences of the people and Government of the Territory.

The Governor and I attended her deeply moving funeral earlier this week that was viewed by millions of people around the world and across our Islands here in the Territory.

May her soul rest in peace and I pray that His Majesty the King and the Royal Family who are still grieving will heal from their loss in time.

Turning to recent developments here at home and in the region, I am grateful to God that we were spared from a direct hit by Tropical Storm Fiona. I want to commend the people of this Territory for their preparedness and cooperation as the storm passes south of us, and thank then Acting Premier Hon. Kye Rymer and then Acting Governor Mr. David Archer for their leadership.

I also want to thank Government's ministries and agencies for their hard work in readying the Territory for the hurricane season and their ongoing responsiveness when extreme weather impacts us. The Department of Disaster Management, Public Works Department, Ministry of Communications and Works, Ministry of Health and Social Development and the BVI Electrity Department deserve much credit for all their efforts.

While we were spared, we must keep in prayer our neighbours in the region who were directly affected by Tropical Storm Fiona and subsequently Hurricane Fiona. In Guadeloupe severe flashfloods inflicted tremendous damage on some communities. In Puerto Rico there were also severe flashfloods that destroyed infrastructure on parts of the island and initially left every community without electricity and some without running water. The situation remains very serious.

I understand that parts of the Turks and Caicos Islands were affected, but no major damage. Hurricane Fione is continuing on its path in the North Atlantic and thankfully has steered clear of Bermuda though their power grid has been affected.

We are still in the height of the hurricane season and I want to encourage everyone to remain vigilant and be prepared for any additional storms that could develop which may affect us.

Ladies and gentlemen, at this point I want to say a few words about tourism and our wider efforts to boost the economy.

However, as Tourism Minister, I first want to publicly congratulate the new Board Members of the BVI Tourist Board on their recent appointments to serve for a three-year period. I have great confidence in the new Chairman Mrs. Delma Maduro and the other 10 board members who represent the various subsectors of the tourism industry with representation from Tortola, Virgin Gorda, Anegada and Jost Van Dyke.  I want to express my thanks and appreciation to our outgoing Chairman, Mrs. Kenisha Sprauve, and outgoing board, who had many successes in a very difficult pandemic period.

The new board is excited and ready to go with just five weeks or so before the next tourism season begins, which we all want to be a success. The new Board will also be looking ahead to the 2022-2023 season and how we can best market and promote the BVI to increase our market share in an increasingly competitive international tourism market that is facing economic headwinds, such as higher fuel prices and high inflation in source markets, such as the United States, United Kingdom and European Union.

The Government of National Unity wants to see the tourism industry thrive in the Territory and for the economy to be more tourism-led in the future. We are taking certain steps to make this happen.

First, as Tourism Minister, I will be discussing with the new Chair of the BVI Tourist Board the importance of a short-term plan to guide the growth and development of the sector over the next two years while a tourism master plan is developed to take our tourism product to the next level.

In the meantime, we are working diligently to make improvements in areas such as airlift, as well in enhancing the tourism product.

As a first step, the Culture portfolio has been transferred to the Premier's Office where it will be integrated with the Tourism portfolio. This is the approach of many countries who see Culture as an integral part of their tourism product. For us here in the Virgin Islands this will include ensuring our museums and historical sites are properly managed and promoted as tourist attractions, and that the full artistic talent of our people can serve as valuable entertainment to visitors and our own domestic tourism market.  The Festival and Fairs portfolio has also been transferred to the Premier’s Office, and the Tourist Board will have much more involvement in the planning and marketing of not only our Emancipation Festival, but all our festivals and fairs year round.

In terms of airlift, discussions are ongoing with regarding flight access to the mainland US. Things are looking very promising, and we will update on progress in due course.

We also continue to examine the best means by which to expand the runway at the Terrence B. Lettsome International Airport and to attract new hotel developments to the BVI. Announcements on progress in these areas will be made in due course.

Importantly, we continue to engage and consult with industry partners and stakeholders on how we can boost tourism.

Just last week I joined many other Tourism Ministers from across the Caribbean for a meeting of the Caribbean Tourism Organisation and Caribbean Aviation Day activities in the Cayman Islands hosted by my colleague Premier Hon. Wayne Panton. I was able to have productive discussions with colleagues and partners that will help to advance our efforts here at home.

Similarly, just yesterday I attended a meeting of the Inter-Virgin Islands Council on St. Thomas where I led a BVI delegation in talks with our USVI counterparts that will result in greater cooperation between the BVI and USVI on marine and maritime issues that will support our tourism industry on this side. Announcements will be made on Friendship Day that we are hosting here in the Territory on 22nd October.

As I said earlier ladies and gentlemen, the Government of National Unity wants to see a more tourism-led economy that will give more business and employment opportunities to our people.

With that ladies and gentlemen, I will wrap up my statement and open up for questions.