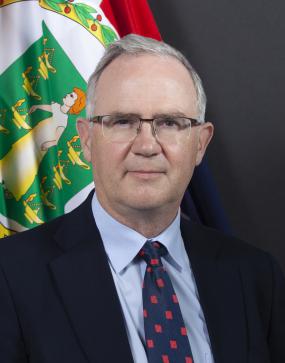 The Review was sent to the UK for consideration by Ministers.  I have now received a letter in response from the Rt Hon Jesse Norman MP, Minister for the Americas and Overseas Territories and as I promised on 4 October, this will now be published and shared with people in the BVI so that they can see it for themselves.

The first and most important point that was made in in the Quarterly Review was that there has been good progress in a number of areas, with work underway on most recommendations.  The Review also noted that I was pleased with the overall constructive engagement and partnership I have had with the Premier and Cabinet.  Most of the deadlines in the Framework have been met on time, and where there have been delays I was satisfied that this has been for legitimate reasons.

So while there is a long way to go in implementation of the COI recommendations to achieve the deep rooted reforms in governance that are required, I am pleased to stress that there has been a good start in many areas with many positives.  To take a number of examples: the Audit Act has been amended to make failure to cooperate with, or impede, the work of the Auditor General a criminal offence; the recommended Police investigations are underway; the Auditor General is conducting the recommended audits; and responsibility for assistance grants has been transferred to the Social Development Department with a Review of the welfare benefits and grants system now taking place with the support of UNICEF.

The Review also raised some concerns in particular areas, including on the continued use of tender waivers and on making the Register of Interests for members of the House of Assembly more openly available.

Let me address the tender waiver issue in some more detail.  The COI found that there was no open tender in two-thirds of all contracts valued over $100,000 between January 2019 and April 2021.  This, combined with contract splitting into petty contracts, was a disregard for good governance, transparency and accountability.  That is why in the Framework document it was agreed that Cabinet documents relating to tender waivers should be published.

Unfortunately such waivers continue to come forward to Cabinet.  I recognise that many of these to date have been legacy issues arising from the practices of the previous administration.  But it remains important that we avoid tender waivers as much as possible and that the commitment to publication is kept.

On the Register of Interests the concern set out in the Quarterly Review was that the amendments passed by the House of Assembly mean that the Register of members’ interests has been made public only in a highly restricted way, with persons wishing to view the Register having to make a written application and pay a fee.  They would then only be allowed to view the Register in the presence of the Registrar and would not be permitted to take any kind of copy or even notes of the contents, and fined for reproducing the contents.   My hope is that the Government and members of the House of Assembly will reflect further on their amendments and whether changes might be made to the Act which would more fully reflect the principles of transparency set out in the Framework document.  For my part I will be happy to work constructively with the Government towards that end.

Let me now turn directly to the response received from the Minister for the Overseas Territories.

As you will see, in his letter Minister Norman expressly recognises that there has been some real progress in implementation of the COI recommendations and that most deadlines have been met.  He was also pleased to learn of the Premier and Cabinet’s overall continued commitment to driving delivery in a constructive partnership.

The Minister also notes the concerns expressed in the Quarterly Review, including in relation to tender waivers.  He notes that the Framework document contained a clear commitment to ensuring that “tender waivers are only agreed in exceptional, unavoidable cases, and which must be explained publicly” and that under the Public Procurement Act single source procurement must only be used in exceptional circumstances.  The Minister makes clear his expectation that there will be immediate and substantial improvement in this area while recognising that there may be some legacy procurement issues from the previous administration which should be addressed proactively and promptly.  The Minister asks me to submit a report at the start of December on the issue of tender waivers and single source procurement so that he can assess progress ahead of the next Quarterly Review in the public interest.

The Minister concludes his letter by agreeing overall that progress in this initial period of COI implementation has been sufficient to continue the current approach.  But he notes that it is vital this is maintained, with commitments and deadlines met.  And he notes that the people of the BVI want and deserve reform and that the UK Government remains committed to taking the necessary actions to ensure that they see that reform delivered.

Further to his letter, I’m pleased to let you know that Minister Norman is planning to visit the BVI next Thursday and Friday, 27 and 28 October. This will be an excellent opportunity for the Minister to meet the Premier, Ministers and members of the House of Assembly, and other key interlocutors and to listen to their views.

I know that the Minister’s goal is to see a successful, thriving, well-governed BVI.  That is a goal which I share as Governor and to which I remain committed.  There is more to be done, and more hard work ahead.  But if we continue to work together to implement the COI recommendations, then I am confident this can lead to the improved governance, transparency and accountability that the people of the BVI deserve.