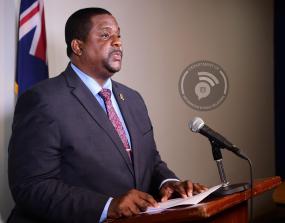 Premier and Minister of Finance, Honourable Andrew A. Fahie has said that there is an economic boost for the Virgin Islands on the horizon within the construction industry through the new emergency procurement policy.

The Premier, in a live address to the Territory on Sunday, August 9, said that over the past few weeks the Government has been working to develop a procurement regime that would allow greater participation by local contractors and service providers, while at the same time adhering to the principles of international best practice and assuring quality, value for money, transparency and accountability.

“The petty contract system has been fraught with challenges and the situation is made even worse because of the precautionary measures that became necessary due to COVID-19,” Premier Fahie said. He added, “We need our infrastructural work done, our local businesses need economic activity, and our people need jobs.”

The Premier explained that the Ministry of Finance, together with Government’s partner agencies designed a procurement policy recently approved by the Cabinet of the Virgin Islands for times of emergencies, such as natural disasters, catastrophic events and pandemics.  The policy will allow Government to engage local contractors, while having a rigorous system of checks and balances.

The Territory’s leader said his Government is now working with the Attorney General’s Office to submit the necessary legislative changes for which approval will be sought by both the Cabinet and the House of Assembly.

Premier Fahie stated, “One important feature of the new emergency procurement policy is that it will allow for, in some cases, the subdivision of larger projects into smaller packages. In this way, more local construction companies – including our smaller contractors – would be able to share in the opportunities that are created by your Government to stimulate our economy through construction, among other areas.”

Honourable Fahie added that the policy framework is completed and Government has been discussing it with funding partners such as international lending agencies.

“This is because we would need their approval to change conditions attached to those funds so that it would allow more qualified local contractors to benefit from these opportunities. By doing this we would be allowing the monies to stay in the Territory and circulate numerous times to positively contribute to the national flow of income,” he further added.

Premier Fahie, who is also the Minister of Finance, said that this process will open many doors of opportunities for all contractors in the BVI amidst this COVID-19 era and that this course of action fits directly into what he said during the 2020 Budget Address that “we must use what is in ‘our hand’ to bring more prosperity to our land”.

Premier’s Address to the Territory on the construction industry is one in a series titled: An Economic Boost for Virgin Islands on the Horizon.  The Government’s objective is to share information on its plans and efforts to revitalise and sustain all sectors of the economy in a phased approach.