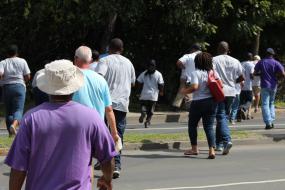 More than 4,600 persons in the British Virgin Islands (BVI) evacuated buildings and made their way to high points as part of the annual tsunami simulation exercise, on Thursday, March 17, titled ‘CARIBE WAVE 16’.

This year’s figure surpassed that of 2015 when 4,200 persons participated in the exercise and is the highest number recorded since the simulation test began in 2009.

Messages to the public were communicated in various ways including text messaging from the local cellular providers, who came onboard last year through a memorandum of understanding with the Department of Disaster Management (DDM).  This arrangement allows the public to have access to several sources through which they can obtain alert and warning information including local radio and television stations, social media, websites, VHF radio systems and through SMART radios that can be bought through local suppliers.  The sirens were used to alert persons who are outdoors to tune to one of these sources as quickly as possible.

CARIBE WAVE 16 provided an opportunity for the Territory to improve its tsunami warning system’s effectiveness and awareness, maintain and promote tsunami preparedness for critical entities and test contingency plans.

The (DDM’s) Training Officer, Carishma Hicks was pleased with the level of participation this year.

Ms. Hicks stated that the annual simulation exercise continues to be supported from the highest level and that this is a clear indication of the importance of disaster planning and preparedness in the Territory.

She said, “The level of response from the public and private sectors, as well as schools was also remarkable and serves as an impetus for the DDM to continue this and other exercises to ensure that the public is aware of what to do in the event of an actual earthquake and tsunami."

The Training Officer specifically recognized the efforts made by some private sector organisations that were able to participate in the exercise.  She said that it is a challenge at times to persuade some private entities to see the value in participating. She added that this year has seen a marked increase in their involvement which speaks volumes to the level of awareness that has been created about the exercise and about the need to constantly prepare and test plans.

A simultaneous tabletop exercise with key stakeholders from a number of government departments was also held at the DDM’s conference room.  This format was used to examine the Mass Rescue and Cruise Ship Plan that was recently approved by Cabinet.  This component was led by DDM’s Planning and Preparedness Manager, Sheniah Armstrong who presented a number of scenarios to the stakeholders with the aim of discussing possible solutions to situations that may arise as a result of a cruise ship being in the local waters following a tsunami event.

Ms. Armstrong explained, “The tabletop exercise explored two scenarios involving a cruise ship. One examined how best to respond to a situation where cruise ship passengers had arrived at the port and disembarked the vessel when the evacuation notice was issued.  The other scenario examined how to deal with receiving, processing and repatriating passengers who were on a cruise ship which had berthed in our waters after its engine sustained some damages while trying to escape the large waves.”

Following the exercise, a debriefing session was conducted in which reports from evaluators and others involved in the monitoring of the evacuation process, were presented and discussed.

Director of the DDM, Sharleen DaBreo said the feedback from the evaluators provided very useful information on how the participants responded to the alert messages that were disseminated.

Ms. Dabreo said, “It gave us a clear picture of whether or not persons understood the evacuation procedures and what measures we need to implement at the DDM to ensure that any gaps are adequately addressed so that persons respond appropriately, should an actual event occur.”

The Director stated that while she was content with the level of participation, there is a greater need for  all private and public sector organisations to capitalise on future opportunities to test their plans and familiarise themselves with the evacuation procedures.

She said, “We had a few new players from the private sector coming on board this year and that is very positive.  We also ensured that as many schools as possible were given an opportunity to test their plans, especially those that will need to be re-certified as SAFE Schools this year.”

Ms. Dabreo added, “We are prone to earthquakes and tsunamis because of our geographical location and we have seen an increase in seismic activity recorded in 2015 in the Eastern Caribbean so we are not preparing you for ‘if’ it happens, we are preparing you for ‘when’.  Therefore, we are strongly advising all sectors of the society to become familiar with their evacuation plans and use this annual exercise to test those plans.”

Persons interested in providing feedback or observations about CARIBE WAVE 16 are encouraged to email the department at bviddm@surfbvi.com or send a message on BVIDDM’s Facebook page.