Remaining 2016 Increments To Be Paid By February 28 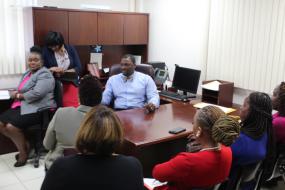 The remaining ten percent of Public Officers of the Virgin Islands can expect to receive their 2016 increments by the end of February.

A meeting between Deputy Governor, Mr. David Archer, Jr. and key stakeholders from the Human Resources Department, Treasury Department and Department of Information Technology sought to establish a clear plan for the finalisation of the payment of increments to remaining public officers.

The stakeholders noted that despite having to transition from the old JD Edwards System, which had been in place for 25 years to the new system, 2,892, or 90 percent of Public Officers have still been able to receive their 2016 increment and the balance of 250 officers are those who had status changes, promotions or were awaiting new job letters.

The Deputy Governor expressed gratitude to Public Officers for the hard work that they continue to do and thanked the team of officers who have been working diligently to get to this point in the distribution of increments.

Mr. Archer Jr.  noted that their efforts have not gone unnoticed, adding, “While there have been some challenges that we have experienced in this process, we are fortunate – all things considered, that we have a chance to perfect the procedure for the processing of 2017 increments.”

The payment of increments for Public Officers for the periods 2016 and 2017 was approved by Cabinet in June 2019.