Research Continues Into Past Wave Occurrences In Anegada 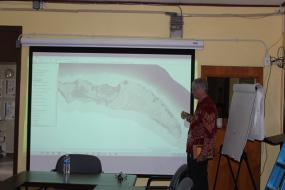 Research is continuing to ascertain what caused an unusual flood from the sea that brought ashore large coral heads in Anegada around the 1400’s.

Geologist Dr. Brian Atwater from the United States Geological Survey on Wednesday, March 9 briefed officials from the Department of Disaster Management (DDM), Ministry of Natural Resources and Labour, Deputy Governor’s Office, BVI National Parks Trust and the Town and Country Planning Department on the ongoing research of the flood that also moved inland sources of limestone on the sister island.

Historical records provide evidence of great earthquakes occurring along the Antilles Subduction Zone in the 1700s and 1800s and the research being undertaken by Dr. Atwater and his team of scientists is to distinguish the geologic records of tsunamis from those of storms.  Anegada was selected for this research because of its evidence for catastrophic overwash in 1200 to1450 AD and 1650 to1800 AD.

Dr. Atwater spent time on the island in February 2011, six months after the passage of Hurricane Earl, working to identify storm-surge limits and examine geologic effects. Comparisons were made with Hurricane Donna and with erosional and depositional features from overwash in 1650 to1800 and earlier.

Anegada is described as having abundant geologic evidence for overwash from the north that overtopped beach ridges at least three metres high.  This evidence dates back to the interval 1650–1800, and has been ascribed to a tsunami or, perhaps, a major storm.

Dr. Atwater in his presentation, reported on the research processes being undertaken and the three scenarios being tested to determine if any of them match the evidence collected since the field work began in 2008.

Dr. Atwater said, “the three scenarios tested are two types of Puerto Rico trench tsunamis and an unusual super storm similar to the 2013 typhoon Haiyan in the Philippines”.

Dr. Atwater added, “as part of the research we worked with a modeler to develop these various simulations, plotted and tested the model results using lidar surveying technology, then we went into the field to see if the evidence there supports the simulation results.  Based on the outcome, the scenarios which do not match the field evidence in Anegada will be eliminated”.

He said, “further field work, mapping and simulations are required to determine what type of event resulted in the corals and limestome boulders being washed ashore and inland and this is why we have continued our work in Anegada this year”.

This research currently being undertaken by Dr. Atwater is funded by US Nuclear Regulatory Commission (USNRC).