Residents Urged To Remain Vigilant For Peak Of Hurricane Season 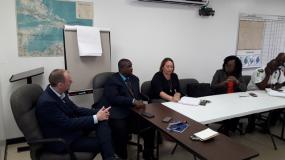 The Government of the Virgin Islands is encouraging all residents and visitors to remain in a state of readiness with the arrival of the peak of the Atlantic Hurricane season.

In light of two separate disturbances in the Atlantic approaching the territory, members of the National Disaster Management Council (NDMC) met yesterday to review any preparation measures that might be necessary.

Governor Augustus Jaspert in his remarks highlighted some of the lessons learned following the passage of Hurricane Dorian.

Governor Jaspert said, “Dorian showed us how rapidly these systems can strengthen and change course. We all need to monitor the forecast very closely and to treat every system as having the potential to develop into a major hurricane.”

The Governor encouraged members of the council to focus their minds on the preparations that are needed now and on the lessons learned from past events as well as the events unfolding in the Bahamas.

Meanwhile, Premier and Minister of Finance, Honourable Andrew A. Fahie has urged the council to consider ways to continually improve the standards of quality at facilities such as emergency shelters. He also spoke about the need to maintain strong relationships with partners in the region.

Premier Fahie said, “Thanks to the regional partnerships around the Caribbean such as those made through OECS and CARICOM, there are many opportunities to obtain the support and guidance that we need to strengthen our preparedness efforts, and more importantly, to provide assistance if we should be severely impacted.”

Mr. Archer, Jr., commented on the extra precautions that take place within the public service in ensuring the security and protection of Government assets. He noted that these measures should become routine as the Territory continues to face unpredictable storm systems.

Department of Disaster Management Emergency Communications Manager, Mr. Jasen Penn gave a review of active systems in the Atlantic, which include Tropical Storm Gabrielle in the north Atlantic, Disturbance 2 near Hispaniola, as well as two other disturbances with the potential to impact the Leeward Islands.

Mr. Penn shared that historically, September 10 is the peak of the season, emphasising the need for the Territory to remain prepared. He also shared other areas of priority concern, such as the need for a more systematic and efficient shut down of the Territory during heightened periods of activity.

The group also planned to carry out measures for ongoing readiness that are achievable within the next week to ensure that the Government is ready to respond should the current systems in the Atlantic continue to show potential for development.

Meetings of the NDMC are called by His Excellency the Governor and the Honourable Premier to discuss policy level matters and to ensure that an acceptable level of readiness is maintained throughout the year.  A readiness report is presented to Cabinet early in the year to determine the level of preparations that are in place for the hurricane season.

Other persons are invited based on the circumstances and at the discretion of the Governor and the Premier.  The Department of Disaster Management serves as the Secretariat to the Council and the Advisors on disaster management matters.